Indiana Jones & the Fridge of Doom: Scientists Say Indy Would Die From Radiation 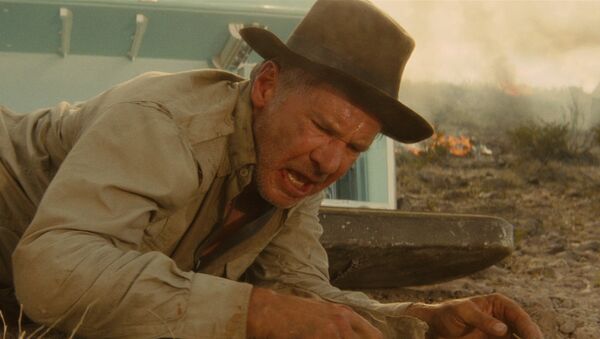 © Universal Pictures
Subscribe
International
India
Africa
The infamous 'nuked fridge' scene in Indiana Jones & the Kingdom of the Crystal Skull is seen by many fans as the most unforgivable scene in the franchise. Now, scientists from the University of Leicester confirm that not only would Indiana have gotten battered in the fridge – he would've died from radiation poisoning caused by the nuclear blast.

Fans of the Indiana Jones franchise got a rude shock back in 2008 when they saw their beloved hero survive a massive nuclear explosion by hiding in a lead-lined fridge, which was catapulted out of the test range to safety. This and other incredibly unrealistic scenes contributed to the film's poor reviews from fans and critics alike, with Crystal Skull remaining by far the lowest-rated film in the Indiana Jones franchise on IMDB.

Now, physicists at the University of Leicester have confirmed, scientifically, that even if Indy had somehow survived the force of the blast and the fridge's launch into the desert, he would have definitely died from the gamma ray radiation fallout immediately following the nuclear explosion, 50s refrigerator lead lining technology notwithstanding.

According to calculations in a paper in the undergraduate physics research Journal of Physics Special Topics by T. Mansfield et al., for Indy to have actually survived the radiation, the thickness of the lead which lined the refrigerator would have had to have been between 4.58 cm and 6.83 cm, something that just wasn't common for lead-lined commercial appliances in the 1950s. The lead on most refrigerators of the day was no more than a couple millimeters thick.

Belarusian Recreates Van Damme's Epic Truck Split, Kickboxer Disco Fight (VIDEO)
Assuming that the nuclear bomb was 1 km away from the fridge in which Indy hid, and taking into account the fridge's dimensions and the radiation that would radiate it immediately following the blast, scientists concluded that for the archeology professor to remain unharmed, the entire fridge would have had to be made of lead.

To be certain, researchers even used three different actual nuclear bomb tests that took place in 1957, the year the film was set, as part Operation Plumbbob. The maximum power of the explosions was equivalent to 74 kilotons of TNT, about five times that of the bomb dropped on Hiroshima.

In any case, the physicists concluded, "all aspects considered," Indiana Jones "would have almost certainly been killed by being caught up within the blast of the bomb, with the fridge being subject to an enormous amount of force." In proper academic form, the paper concluded that this too "could be further investigated."

Futuristic Korean Technology Brings the Movie ‘Avatar’ to Life
Operation Plumbbob, carried out between May 28 and October 7, 1957 at the Nevada Test Site, was the largest and longest series of nuclear tests ever carried out in the United States, and consisted of 29 explosions, all but two of them producing a nuclear yield. The tests were controversial for their use of 18,000 service members of the United States military, with the Pentagon looking to figure out how soldiers would fare against the rigors of a battlefield where tactical nuclear weapons were deployed. The tests' radiological effects are believed to have caused between 1,000 and 20,000 deaths, and between 11,000 and 212,000 excess cases of thyroid cancer.
Newsfeed
0
Access to the chat has been blocked for violating the rules . You will be able to participate again through:∞. If you do not agree with the blocking, please use the feedback form
The discussion is closed. You can participate in the discussion within 24 hours after the publication of the article.
To participate in the discussion
log in or register
loader
Chats
Заголовок открываемого материала