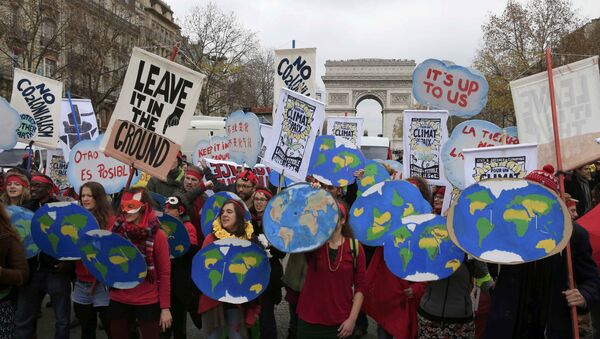 The two major causes of the increase over last year are the continued buildup of greenhouse gases in the Earth&'s atmosphere and by an El Niño in the Pacific Ocean. 2015 itself was a record breaking year, breaking previous record set in 2014.

"We are already seeing around the globe the impacts of a changing climate," said Copernicus's Juan Garcés de Marcilla. "Land and sea temperatures are rising along with sea-levels, while the world's sea-ice extent, glacier volume, and snow cover are decreasing; rainfall patterns are changing and climate-related extremes such as heatwaves, floods and droughts are increasing in frequency and intensity for many regions."

Copernicus is the first of the major climate agencies to announce its 2016 figures. Others will soon follow and their data will be compiled by the United Nations World Meteorological Organization (WMO) in the coming weeks. Copernicus deputy head Dick Dee said that existing WMO data is "pretty much in perfect agreement" with Copernicus's findings.

While Copernicus collects climate information from temperature stations and satellite measurements, other datasets that the WMO uses include information from ships, buoys, and balloons, which can take longer to compile.

Copernicus estimated that the global temperature average has increased 1.3°C in the last 200 years since the Industrial Revolution initiated the human consumption of fossil fuels.

In 2015, 200 nations met in Paris to try to limit greenhouse gas emissions so as to slow global warming to no more than a 1.5°C-gain over pre-industrial levels. The treaty, meant to replace the ineffective 1997 Kyoto Accords, is to take effect in 2020. Some meteorologists, such as Weather Underground" Jeff Masters, say that the Paris agreement is insufficient, and Earth will see a 2.3°C-increase by 2050, even if every nation held to the accords.