BBC Plumbs the Depths of Indecency With Daesh Comedy Sketch 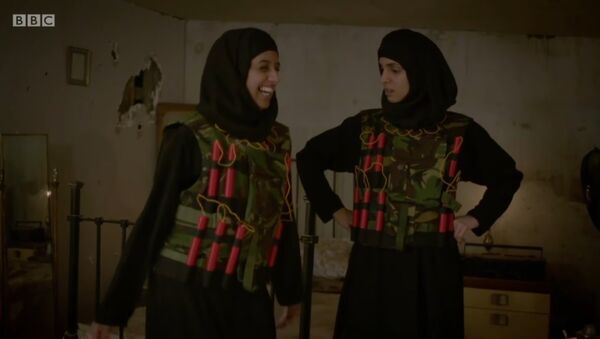 John Wight
All materials
Comedy is at its best when it acts as a shield, holding the powerful to account through ridicule. At its worst it is deployed as a sword, abusing the powerless and victims of cruelty or oppression.

It is the latter category into which an upcoming comedy sketch titled 'The Real Housewives of ISIS' undeniably belongs. Indeed to state that this particular sketch, produced as a take off of the popular 'Real Housewives' reality TV series in the US, is in bad taste is putting it lightly, given the record of butchery, slaughter, mass rape, enslavement, and terrorism associated with Daesh (also known as ISIS or ISIL).

​Meanwhile, the fact it is scheduled to be broadcast by the BBC, the British state broadcaster and long held as a symbol of decent British values, merely compounds the offense, what with the BBC's role in attacking the main forces that have actually been engaged in combatting the barbarism and brutality of Daesh on the ground in recent years.

It is also offensive on the level of Islamophobia, in that it will be bound to reinforce anti-Muslim stereotypes in Britain, where Islamophobia is particularly rife, and wherever else it might be shown afterwards. This constitutes a particular injustice when we consider the fact that Muslims have made up the vast majority of victims of Salafi-jihadi terrorism, while Muslims have and continue to play the main role in resisting and confronting it on the ground.

The sketch is being aired as part of a comedy show called 'Revolting,' written by Heydon Prowse and Jolyon Rubinstein, two friends who met at a private school in London. Defending their work they argue:

"It's important not to pull your punches in satire. You have to be fearless or it undermines your credibility."

I wonder how many people offended by the ISIS sketch have watched the whole show?

​​In the sketch, Daesh brides are depicted discussing what to wear at a beheading, modeling suicide belts, and discussing being groomed online.

.@BBC @HeydonProwse @JolyonRubs Your show doesn't 'satirise ISIS', but mocks all Muslims and dehumanises the current situation in Syria…

​Critics of the show include Sara Salem of Warwick University, who said:

"The trouble with this type of humour is that it ignores the broader context in which it will be revived, namely British society."

The BBC did not make a Real Housewives of ISIS?

That's it, I'm getting rid of my TV licence…..not giving them another frickin' penny!

​"While it may challenge some people's conceptions of Muslim women by making light of tropes we hear of constantly, for many others it won't serve as anything more than comedy based on things they already believe in and will continue believing in."

I know a lot of people who say that religion is nothing to be joked about, but who drew that line? You did. Sensitivity is subjective.

​"Not only is it not a challenge to these stereotypes, it is using them to make light of what is ultimately not a very funny situation," Ms. Salem concludes.

@sfqomhz In a democracy all religions can and should be mocked.

A) ISIS has nothing to do with Islam
B) 'The Real Housewives of ISIS' is offensive to Muslims
Pick one.

​​Political correctness is not the issue here, as some have suggested in their defense of the sketch. What is at issue is the utter lack of sensitivity to the fact that many so-called Daesh brides are women who've been kidnapped and enslaved, given to fighters within the terrorist organization as chattel, whereupon they are subjected to rape, torture, and physical and mental abuse.

Wtf are bbc2 doing with The Real Housewives of ISIS? Glad they're having a laugh while the actual housewives of Isis are being raped👍🏻

​In August 2016 the UN issued a report on the plight of the Yazidis, a religious and ethnic minority group from the Sinjar province of northern Iraq. 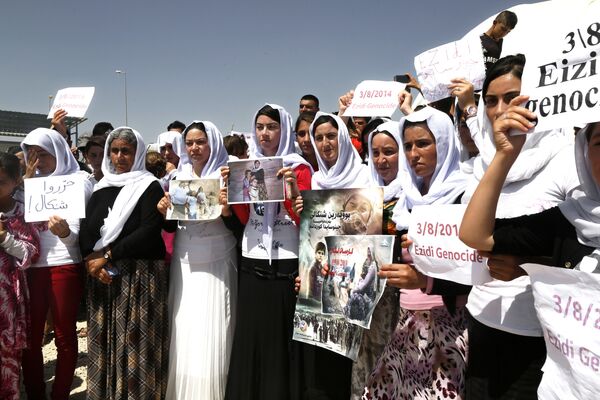 During a Daesh offensive against Sinjar in 2014 thousands of Yazidis were slaughtered while thousands of young Yazidi women were abducted and sold as brides and/or sex slaves within Daesh-controlled territory.

In the report a witness describes being "put on one of a group of buses and driven back and forth to Mosul by ISIL [sic]. Along the way back, they stopped at a place where there were around 50 cars with men wearing white long dress, similar to the Gulf national dress. These men came inside the bus and began picking girls. Some of the men used wooden sticks to beat the mothers who tried to resist. After putting the girls into their cars, these men gave the ISIL members money before departing."

The BBC, it should be recalled, has played a particularly onerous role in attacking those who have been combatting Daesh in Syria in recent years — i.e. the Syrian government and Russia. Last summer investigative journalist Gareth Porter wrote an article analyzing the BBC's coverage of the conflict in Syria. In it he writes:

"It could hardly be more obvious that BBC news reports, comment pieces and discussions are overwhelmingly hostile to US-UK government enemies like Russia, Iran, Venezuela, North Korea and Syria, and overwhelmingly favorable to the United States and Israel."

Of course it's offensive. Because the #BBC take offence at everything.
Double standards.
Real Housewives Of ISIS — https://t.co/dqGqrloe7y

​He then goes on:

"It has long been clear to us that BBC journalists perceive this, not as bias, but as an accurate depiction of a world that really is divided into well-intentioned Western 'good guys' and their enemies, the 'bad guys.' "

BBC journalist writes long diatribe about how he isnt bias, then chastises someone for reading a Russian source. Clearly bias against Russia pic.twitter.com/rkHsYXJp2a

​Porter's analysis provides multiple examples of skewed BBC coverage of the conflict, detailing how in various interviews, news reports, and debates conducted on the British state broadcaster the starting point is as the journalist asserts the 'good guys' of the West ranged against the 'bad guys' of Russia and its Syrian and Iranian allies, fighting not terrorists and jihadis but rebels and freedom fighters.

The point being made here is an important one. Not only is the BBC hosting 'comedy' derived from the suffering of thousands of women in Daesh-controlled territory, in the process peddling Islamophobic tropes, it has played an insidious role in attacking the very forces engaged in fighting Daesh.

People can draw their own conclusions.