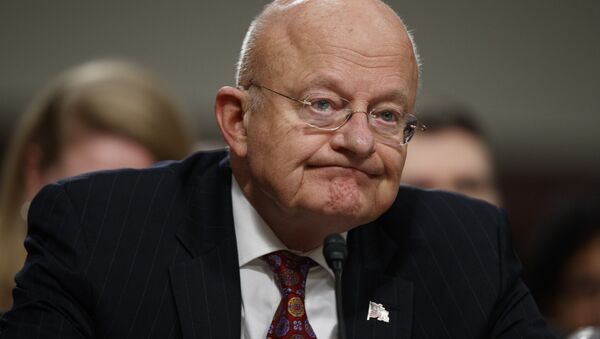 Thursday’s Senate hearings to discuss alleged "Russian hacking" featured questions from yours truly at Sputnik News, and RT, but the intelligence community simply swung and missed on this one.

During the highly-publicized hearing on ‘Russian hacking’ of US elections, Senator Martin Heinrich (D-NM) asked James Clapper, the US Director of National Intelligence, how much of a concern for him are Sputnik News and RT, which he referred to as “Russian propaganda.” Clapper, who clearly felt uncomfortable after dodging several questions and refusing to present Senators with evidence confirming Russia’s participation in alleged ‘hacking,’ was happy to hear a softball question.

“So all of these other modes, whether RT, use of social media, fake news… They exercised all those capabilities in addition to the hacking,” Clapper said during the Thursday’s hearing. The “totality” of the efforts, which by looking at capital investment is roughly one-third as much as the US spends, “regardless of its impact, “which we can’t gauge,” Clapper said, is a matter of grave concern."

In fact, we can gauge the impact of state-funded media organizations, but the picture painted of US operations manifests absolute inefficiency. Preliminary research suggests that Clapper’s fear-mongering tactics may just be a way to protect the livelihood of a bloated US bureaucracy, and Clapper, of course, is among the bureaucratic class. There are a whole 17 “intelligence” agencies with undisclosed, classified budgets. Perhaps many of them exist largely to scratch each other’s backs. Nevertheless, Washington’s media communications arm, the Broadcasting Board of Governors (BBG) is perhaps the Mount Everest of bureaucratic ineffectiveness. With a massive three-quarters-of-a-billion dollar budget, or about $768 million, Helle Dale, a senior research fellow with the Heritage Foundation, told Congress that BBG’s site has essentially no impact on Russians, as the site ranks 3,828th in the country.

In 2013, former US Secretary of State Hillary Clinton told the House of Representatives that the BBG is "defunct in terms of its capacity to be able to tell a message around the world."

Clapper, it is remembered, is best known to the public as the person who lied to Congress about US spying activities. On March 12, 2013, during a United States Senate Select Committee on Intelligence hearing, Senator Ron Wyden (D-OR) asked him whether the NSA "collect any type of data at all on millions or hundreds of millions of Americans?" Clapper responded: "No, Sir."

The answer seemed to make Senator Wyden so uncomfortable that he repeated the question: "It does not?"

This time Director Clapper responded "Not wittingly. There are cases where they could inadvertently perhaps collect, but not wittingly."

However, fairly soon it was revealed that NSA collected dragnet data of American phone records, thanks to whistleblower Edward Snowden. The NSA program aggregates metadata from millions of law-abiding Americans in collusion with telecom giants, who Americans pay every month for the supposed privilege of using cellphones. Literally, Americans spend money to get spied on by their own government. Those, who remember Clapper’s testimony demand that he be held accountable for lying to Congress, a felony. The Director of National Intelligence first claimed that he "misunderstood" the question and that he had simply "forgotten" the relevant section of the Patriot Act covering these programs. However, later he was forced to formally apologize to Congress and admit that his statement was the “least untruthful answer” he could give to protect secretive spying programs that target US citizens.

Maybe Clapper is frustrated that Russian media outlets Sputnik and RT are simply better managed with more discriminating thinkers, journalists, and TV and radio hosts. Some 35 million tune in to watch RT every day across the US and Europe. Perhaps viewers simply prefer to watch US icons such as Larry King, winner of two prestigious Peabody awards, and Ed Schultz, former MSNBC TV host. RT is among the top-five most-viewed international news channels, according to Paris-based research firm Ipsos, which studies TV ratings.

The difference in return on investment is staggering: RT’s budget is just 17 billion rubles, or approximately $239 million.