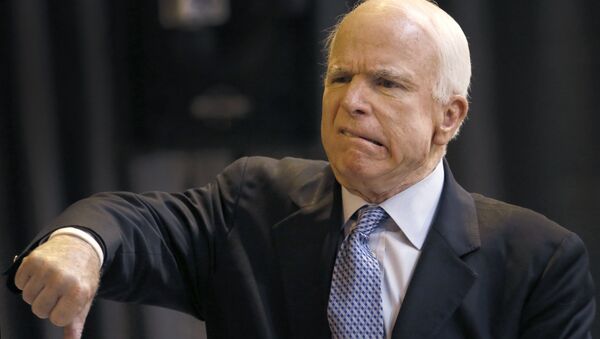 © AP Photo / Matt York
Subscribe
No evidence was presented during the Senate Armed Services Committee hearing on Thursday to support allegations that Russia hacked the US Presidential election, despite multiple calls by Republican Senator Lindsey Graham for the nation to “throw rocks” at the Kremlin.

The highly-anticipated hearing was expected to lay out the basis for US intelligence agency claims of Russian interference, but that was not the case. Instead, it was two hours of unsubstantiated statements, calls for aggression towards Russia, and hyperbole.

"I don't think that we have ever encountered a more aggressive or direct campaign to interfere in our election process," Clapper told the committee, while refusing to provide evidence to back up his claims.

Committee chairman and Republican Arizona Senator John McCain used strong language during the hearing, including saying that the alleged hack was "an unprecedented attack on our democracy.”

When questioned by a Sputnik reporter following the hearing about the debunking of the Joint Annual Report by security experts, including the finding that 43 percent of the IP addresses attributed to ‘Russian hackers’ were generic web-browser Tor exit nodes, the Senator responded by saying that he had “no idea” what she was talking about.

As Sputnik previously reported, a whopping 367 of the IPs addresses that were claimed to be ‘proof’ of Russians hacking into the Democratic National Committee network, were simply Tor exit nodes, according to recent expert analysis. This means anyone using a Tor web browser, whether in Ireland, Nigeria, Alaska, or in mom’s basement in Ohio, could leave an IP trace that would apparently reveal them to be crème de la crème Russian computer hackers, according to the logic of the US intelligence community’s report.

McCain also stated that he had nothing to say about his former running mate Sarah Palin apologizing to Wikileaks. 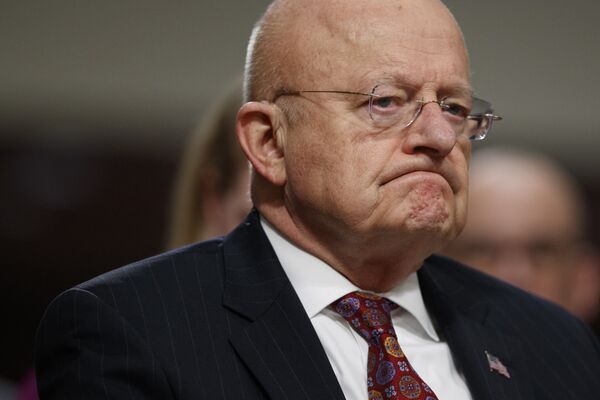 Despite not believing that Russia affected the election outcome, Cruz did assert that there needs to be a serious effort to harden US networks to protect against cyberattacks.

WikiLeaks publisher Julian Assange was also under attack during the hearing, with Clapper falsely stating that he has been “indicted for a sex crime,” and that he put American lives at risk. Assange has not been indicted by Sweden and claims that anyone was placed in danger by WikiLeaks releases have been widely, and repeatedly, debunked.

McCain questioned if “there is any credibility we should attach to this individual,” speaking of Assange. Both Rogers and Clapper declared that there was not.

While WikiLeaks is known for publishing only actual information, the same cannot be said for the US intelligence community, a fact which was also brought up during the hearing.

After noting that many have compared the claims about Russian hacking to the “weapons of mass destruction” claims that led the US to unnecessarily invade Iraq, the comparison was rapidly written off as a “red herring.”

Clapper referred to Sputnik and RT as “Russian propaganda,” a deep concern to him.

Clapper claimed that a report from intelligence agencies will be publicly released next week outlining the “motives” behind the Russian hack. It is unclear if these potentially fictionalized motives will be supported by the same fictionalized evidence presented at this hearing and the JAR.

000000
Popular comments
There is no way this can do anything but come back to bite the DNC and globalists, hard. This must be the silliest and most awkward intelligence scam the US has ever attempted.
jas
5 January 2017, 22:48 GMT4
000000
It's time the GOP base confronted McCain and Graham and had them ejected from the GOP.
jas
5 January 2017, 22:51 GMT5
000000
Newsfeed
0
New firstOld first
loader
LIVE
Заголовок открываемого материала
Access to the chat has been blocked for violating the rules . You will be able to participate again through:∞. If you do not agree with the blocking, please use the feedback form
The discussion is closed. You can participate in the discussion within 24 hours after the publication of the article.
To participate in the discussion
log in or register
loader
Chats
Заголовок открываемого материала
Worldwide
InternationalEnglishEnglishMundoEspañolSpanish
Europe
DeutschlandDeutschGermanFranceFrançaisFrenchΕλλάδαΕλληνικάGreekItaliaItalianoItalianČeská republikaČeštinaCzechPolskaPolskiPolishСрбиjаСрпскиSerbianLatvijaLatviešuLatvianLietuvaLietuviųLithuanianMoldovaMoldoveneascăMoldavianБеларусьБеларускiBelarusian
Transcaucasia
ԱրմենիաՀայերենArmenianАҧсныАҧсышәалаAbkhazХуссар ИрыстонИронауОssetianსაქართველოქართულიGeorgianAzərbaycanАzərbaycancaAzerbaijani
Middle East
Sputnik عربيArabicArabicTürkiyeTürkçeTurkishSputnik ایرانPersianPersianSputnik افغانستانDariDari
Central Asia
ҚазақстанҚазақ тіліKazakhКыргызстанКыргызчаKyrgyzOʻzbekistonЎзбекчаUzbekТоҷикистонТоҷикӣTajik
East & Southeast Asia
Việt NamTiếng ViệtVietnamese日本日本語Japanese中国中文Chinese
South America
BrasilPortuguêsPortuguese
NewsfeedBreaking
15:32 GMTScared of Misinformation? Beware of... Cute Cats, NYT Warns
15:00 GMTIndian Cricketer Virat Kohli's Dismissal in Second Test Match Against New Zealand Sparks Controversy
14:53 GMTIndia Deployed Warships at Forward Positions in IOR During Border Clashes With China: Navy Chief
14:52 GMT'Alternative' Mueller Report Could Be Released Soon
14:49 GMTRevealed: CIA Staffers Involved in Child Sex Abuse Crimes Dodged Prosecution Despite Evidence
14:01 GMTBritish Couple Who Killed Six-Year-Old Arthur Labinjo-Hughes Jailed
13:59 GMTWarsaw Expects New Afghan Migrant Flow at Border Organized by Minsk in Next Months
13:56 GMTLocked and Loaded: Man Ends Up With WWII Artillery Shell Stuck in His Rectum
13:41 GMTRussia's Arctic National Park Reports Disappearance of Peninsula on Franz Josef Land
13:33 GMTPakistan Says Its Serbian Embassy Accounts Hacked After Posts Criticising PM Khan Appear Online
13:33 GMTSri Lankan Factory Manager in Pakistan Beaten to Death by Mob For Alleged Blasphemy
13:06 GMTMossad Chief Vows Iran Will ‘Never Have’ Nuclear Weapons', Says ‘Bad Deal With Tehran ‘Intolerable’
13:06 GMTIndia Scouts to Induct Army's First-Ever Terminal Guided Munitions to Prevent Collateral Damage
13:00 GMTTrump's False Positive COVID Test is Non-Story, US Media Has Disgraced Itself Again, Observers Say
12:41 GMTMother of Addicts Says US Could Avert Record Overdose Deaths if Issue Treated as Epidemic
12:04 GMTTop Indian Genome Scientists Recommend COVID Booster Dose for Over-40s In Omicron Scare
12:00 GMTBiden Boasts About His Liaison Role During Six-Day War When He Was Law School Student - Media
11:45 GMTOil Giant Shell Pulls Out of Cambo Field Off UK
11:42 GMTScotland Yard Warns Another Terror Attack in UK ‘Highly Likely’ During Christmas Season
11:33 GMT'Quad' Refuses to Co-Sponsor UN's 'Olympic Truce' Resolution, Australia and US Mull Boycott