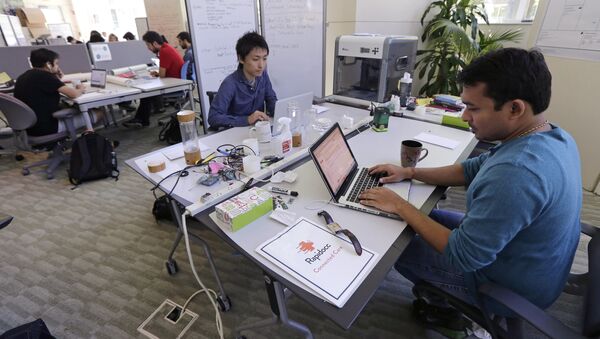 The Indian IT sector has one more reason besides the global slowdown to worry about after the US, its biggest market, took up a law to make it more difficult for Indians to take up IT contract jobs.

Indian Fashion Divas Must Do Without Animal Skin Drapes
New Delhi (Sputnik) – A bill backing key changes in the H1-B programme has been re-introduced in the US Congress by two lawmakers.

A liberal H1-B Visa program is crucial to the profit margins of Indian IT companies because it allows modestly paid but skilled foreign workers to fill high-tech jobs in the US. Indians account for 60 per cent of H1-B visas issued by the US Government.

The bill, among other things, increases the minimum salary of H-1B visa holders to USD 100,000 per annum and also eliminates the Masters Degree exemption.

For many young Indians the visa is the passport to success in life as it inevitably leads to a Green Card. But Congressman Issa thinks differently. "In order for America to lead again, we need to ensure we can retain the world's best and brightest talent. At the same time, we also need to make sure programs are not abused to allow companies to outsource and hire cheap foreign labor from abroad to replace American workers," Issa was quoted in official press release.

The bill comes after a number of companies including Disney, SoCal Edison and others — have come under fire for abusing the H1B Visa programme to replace American workers with foreign workers, said the release.

US President-elect Donald Trump had vowed to reshape the immigration policy in order to push companies to invest and hire more in the US. Trump has said that as soon as he assumes office, he would ask the Department of Labor to investigate "all abuses of the visa programmes that undercut the American worker." One of the first Cabinet appointments announced by the President-elect was that of Senator Jeff Sessions as the next attorney-general. Sessions is known to be a strong advocate for tighter immigration laws.

However, experts don't think Indian companies and workforce should worry as there is a significant skill gap in the US, which may dilute the "America First" rhetoric.

The US Labor Department's December 2015 report indicated a significant skill gap that will accentuate to a shortfall of about 445,000 computer professionals by 2022. Experts also feel that since most of the Indian companies work for Fortune 500 corporates, there would be significant lobbying by to thin down skilled worker visa restrictions.

Nevertheless, the profit margins of Indian IT companies are under huge pressure because of a significant rise in their sub-contracting expenses. The tightening of H1B visa regulations and other administrative measures being currently speculated may trigger panic in the Indian IT sector which also hosts a wide variety of outsourced back-end jobs. This nervousness was reflected in the shares of IT companies at the Bombay Stock Exchange (BSE) following the news of reintroduction of the legislation regulating H1B visas. Stocks of Indian IT corporate like Infosys, TCS and HCL Tech fell one to two per cent.

The $143 billion Indian IT industry derives 60 per cent ($65 billion) of its total export revenue of $108 billion from the US market alone. The backers of Indian IT industry say it supports over 400,000 direct and indirect jobs in the US (with the majority of these going to American nationals) and pays about $5 billion of taxes every year. Indian IT companies work with around 80% of Fortune 500 companies to make them more competitive by providing innovative solutions.