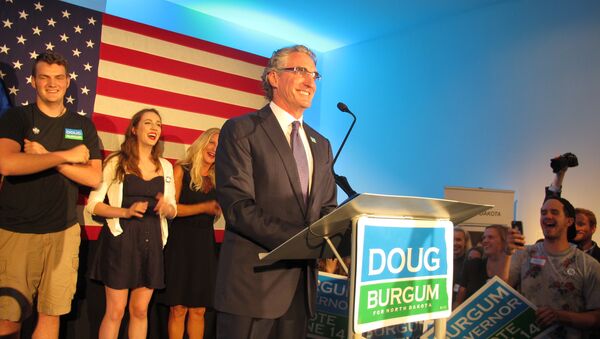 On Tuesday North Dakota Governor Doug Burgum announced that water protectors and activists protesting the Dakota Access Pipeline must vacate the construction site before spring, as the area is subject to flooding.

Since the summer the Standing Rock Sioux tribe and thousands of supporters have been demonstrating against the $3.8-billion pipeline, which would cross four states and potentially damage native lands and contaminate the water supply.

After the Army Corps of Engineers’ December 2016 decision to deny an easement that would allow construction under the Lake Oahe reservoir, Sioux leaders asked the protesters to leave. Some dispersed, while others decided to stay and weather North Dakota’s bitter winter.

During his State of the State address in Bismarck, Burgum said, "The main protest camp is located directly in the floodplain of the Cannonball-Missouri River confluence. Given the snowfall we're having this winter and historic data on the Cannonball River, that camp will likely flood in early March," adding, "Anything less than a complete restoration of the area prior to the early March flood will endanger the lives of the protesters and of our first responders."

Having taken office in December, the wealthy former tech executive supports the completion of the pipeline, siding with law enforcement officials who assert that many of the protesters come from outside the state and are willing to sacrifice security for environmental concerns.

He said, "Those original concerns have been hijacked by those with alternative agendas."

Hours after being elected Burgum blamed the White House for not resolving the pipeline issue, saying the Obama administration “politically stalled a legally permitted project,” and that future investors may be scared off as a result.

The Republican governor promised to meet with Standing Rock tribal leaders laters this week, claiming that he recognizes that the pipeline represents the displacement and ill-treatment of Native Americans by the government and business.

"The history of American settlement and westward expansion contains many tragic episodes of broken promises, displaced native peoples, and forced assimilation," he said, adding, "It is in this context that the Standing Rock situation must be understood."

Energy Transfer Partners (ETP), a Dallas-based company building the pipeline, is appealing to a federal court to grant a permit to complete the 1,172-mile structure, and has sharply criticized the government’s decision to halt its progress.

ETP released a statement in early December 2016, following the Army Corp decision, saying, "The White House's directive today to the Corps for further delay is just the latest in a series of overt and transparent political actions by an administration which has abandoned the rule of law in favor of currying favor with a narrow and extreme political constituency."

ETP CEO Kelcy Warren declared the move to be "motivated purely by politics," and said that "to further delay this pipeline and to engage in what can only be described as a sham process sends a frightening message about the rule of law."