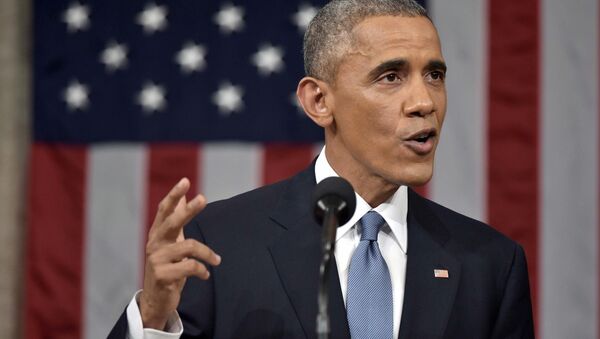 WASHINGTON (Sputnik) — Obama headed to Capitol Hill on the first full day of the 115th US Congress to rally fellow Democrats for battle against Republicans, who have vowed to repeal Obama’s signature healthcare law their first order of business, lawmakers told reporters at a news conference following a morning session with the president on Wednesday.

"The president asked us, ‘are you ready, do you have the fight in you,’ House of Representatives Democratic Leader Nancy Pelosi quoted Obama as saying. "He didn’t need to ask us that question."

Pence: Free Market is Solution to Soaring US Healthcare Costs Under Obamacare
Pelosi was joined by lawmakers from both houses of Congress, including her counterpart in the US Senate, Democratic leader Chuck Schumer, who characterized health care as the new Congress’ "first big fight."

Republicans, who control both houses of Congress, plan to scuttle Obamacare and then begin drafting legislation to revamp the entire US health care system.

Democrats demanded that Republicans first write a new health care law before scuttling the Obamacare, which has made health insurance available to 20 million uninsured Americans.

"Instead of working to further insure affordable care for all Americans, they [Republicans] seek to rip health care away from millions of Americans," Schumer said.

Senate Minority Leader Accuses Republicans of Plotting to Destroy US Healthcare
Republicans planned to reveal their plans for healthcare later in the day. But Vice President-elect Mike Pence indicated earlier that Americans would be protected during the transition from Obamacare to a new system.

Repeal of Obamacare, he said during a separate news conference, would coincide with a series of executive orders issued by President-elect Donald Trump that would keep many features of Obamacare in place as Congress works on a replacement.

"We don’t want people to be caught with nothing," Pence explained. We want to make sure… that the rug is not pulled out from under the families who are currently struggling under Obamacare."

At issue are soaring insurance premiums under Obamacare, set up exchanges where people who lack employer-provided coverage can purchase individual and family policies.

Insurance companies exited many exchanges after losing hundreds of millions of dollars in 2016. With less competition premiums soared in 2017, more than doubling in the US state of Arizona and with increases of more than 50 percent in other states.

000000
Popular comments
Is Obama is getting a cut of the premiums from health insurance? That works to a few millions and he is afraid to lose it. Americans have been fooled again.
copius
4 January 2017, 23:19 GMT
000000
I doubt that Nancy patted Obama on the butt and said, "Don't worry, we will fight to the death to maintain the name "Obama" in whatever next they want to call it. Now you go outside and play in the garden until we call you back in. Okay, Toots?" I doubt that any Democrat is going to fight to the death for "Obamacare."
marcanhalt
4 January 2017, 23:50 GMT
000000
Newsfeed
0
New firstOld first
loader
LIVE
Заголовок открываемого материала
Access to the chat has been blocked for violating the rules . You will be able to participate again through:∞. If you do not agree with the blocking, please use the feedback form
The discussion is closed. You can participate in the discussion within 24 hours after the publication of the article.
To participate in the discussion
log in or register
loader
Chats
Заголовок открываемого материала
Worldwide
InternationalEnglishEnglishMundoEspañolSpanish
Europe
DeutschlandDeutschGermanFranceFrançaisFrenchΕλλάδαΕλληνικάGreekItaliaItalianoItalianČeská republikaČeštinaCzechPolskaPolskiPolishСрбиjаСрпскиSerbianLatvijaLatviešuLatvianLietuvaLietuviųLithuanianMoldovaMoldoveneascăMoldavianБеларусьБеларускiBelarusian
Transcaucasia
ԱրմենիաՀայերենArmenianАҧсныАҧсышәалаAbkhazХуссар ИрыстонИронауОssetianსაქართველოქართულიGeorgianAzərbaycanАzərbaycancaAzerbaijani
Middle East
Sputnik عربيArabicArabicTürkiyeTürkçeTurkishSputnik ایرانPersianPersianSputnik افغانستانDariDari
Central Asia
ҚазақстанҚазақ тіліKazakhКыргызстанКыргызчаKyrgyzOʻzbekistonЎзбекчаUzbekТоҷикистонТоҷикӣTajik
East & Southeast Asia
Việt NamTiếng ViệtVietnamese日本日本語Japanese俄罗斯卫星通讯社中文（简体）Chinese (simplified)俄罗斯卫星通讯社中文（繁体）Chinese (traditional)
South America
BrasilPortuguêsPortuguese
NewsfeedBreaking
01:37 GMTUS ‘Humiliated Like Never Before’, Trump Says, After DHS Allowed Thousands of Migrants to Pour in
01:31 GMTLockheed Martin to Build US Army’s Next Generation Tactical Vehicle Based System
01:10 GMTBorder Patrol Agents Disgruntled Over Biden's Attempts to Throw Them 'Under the Bus' - Report
00:53 GMTBeard-Check: Afghan Barbers Banned From Shaving, Trimming Beards - Reports
00:27 GMTR. Kelly Found Guilty: Will Artist Be Removed From Music Services?
00:03 GMTIs Sir Alex Ferguson Right, That Ronaldo, and not Messi, Could Score a Hat-trick for Anyone?
00:00 GMTUS Senator Menendez Urges New Sanctions on Turkey if It Acquires More Russian Weapons
YesterdayInsurgents Who Detained President of Guinea Declare Transitional Charter - Reports
YesterdayTexas Lawmakers Propose New Congressional Districts in Cities of Austin, Houston
YesterdayIOM Looking for Alternatives for Haitians at US Border, Brazil Being 1 Option - Sources
YesterdayCzech Republic Will Purchase Israeli-Made Air Defenses to Replace Soviet Gear
YesterdaySPD Leader Scholz Says Yet to Hear Congratulations From CDU/CSU Rival
YesterdayTaliban Say Norwegian NGO Promises to Ship Humanitarian Aid to Afghanistan This Winter
YesterdayUS Blue-Chip, Tech Stocks Fumble on Worries of Rate Hike
YesterdaySerbian Troops Monitoring Situation at de-Facto Serbia-Kosovo Border Amid Protests
YesterdayUnidentified Man Threatens Journalist, France's Potential Would-Be President Eric Zemmour - Reports
YesterdaySenate Republicans Vote to Block Gov't Funding, Debt Limit Bill Just Days Ahead of Shutdown Deadline
YesterdayGOP Slam 'Economically Illiterate' Admin After It Claims $3.5 Trillion Bill Costs 'Zero Dollars'
YesterdayUS President Joe Biden Aims to Save Obama-Era Policy DACA
YesterdayUK Calls Renewable Energy Main Alternative to Gas as Energy Crisis Deepens