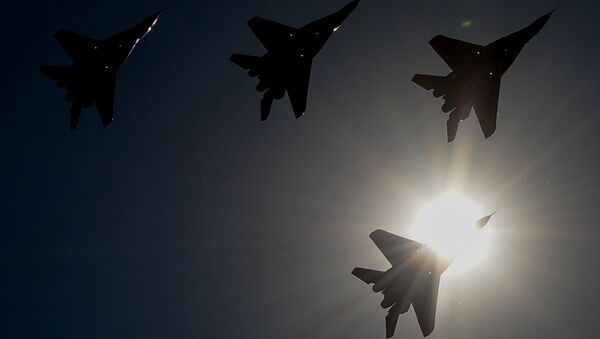 India and Russia are trying to correct the tardy supply of spares for fighter aircraft with a pact that would pave the way for local manufacturing of spares. This move should give further impetus to Indo-Russia defense ties.

New Delhi (Sputnik) — India and Russia are at an advanced stage of signing a long-term arrangement that includes the manufacturing some of the spares of Russian-made aircraft being assembled in India.

Sources say talks between both countries are at an advanced stage for setting up a logistics hub for its most lethal combat aircraft, the Su-30MKI, at the facilities of Hindustan Aeronautics Ltd (HAL) in Bangalore.

"Our status with Russia is much better than two years back. We have signed many of the contracts this year, very few are left. We are working on long-term arrangements including the manufacturing some of the spares in India. Earlier, there were some problems due to the need to change their [Russian] laws," Manohar Parrikar, India's Defense Minister, said.

Sources told Sputnik that delegation level talks are scheduled in March to sign the contract for improving spare parts availability including manufacturing some of them in India. Meanwhile, a significant improvement has witnessed in the availability of Sukhoi-30 fighter aircraft in last two years. "Sukhoi availability which had slipped to 46 per cent today is now above 63 per cent," Parrikar said.

Delhi Wants to Ascertain Production, Export Right of Russia-India FGFA Project
The Indian Air Force (IAF) has finalized a long-term repair agreement with Russian original equipment manufacturers to improve the availability of aircraft for operational use. But it takes up to 18 months to deliver spare parts from Russia mainly due to cumbersome bureaucratic process and extensive documentation.

The Indian government is of opinion that a logistic hub will further improve the availability of Sukhoi-30 from the current 63 per cent. Currently the IAF has over 200 Su-30MKI fighters in its fleet and is expected to receive more by 2019. India has contracted for the delivery of 272 Su-30MKI with Russia. 75 per cent of operational fighter aircraft in the IAF are of Russian origin. This includes MiG-21, MiG-27, MiG-29 and Su-30MKI fighter aircraft.

Parrikar has also asked Russia to speed up the supply of technical equipment for an aircraft carrier, currently under construction at Cochin shipyard, so that it is not too much behind schedule. Due to the delay in the supply of some critical components, the carrier's delivery schedule has been revised from December 2010 to December 2018. The original cost of $490 million has been revised to $2.9 billion. The delay is impairing India's maritime capabilities in the Indo-Pacific Region. India currently has lone Russian-made aircraft carrier in service whereas it needs a total of three.