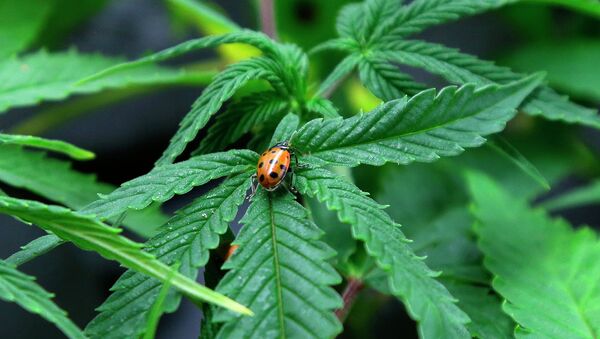 © AP Photo / Ted S. Warren
Subscribe
If you smell something burning at the upcoming presidential inauguration, do not fear, as it is likely only marijuana, as a DC pot advocacy group has pledged to hand out thousands of free joints to inauguration attendees.

Adam Eidinger, founder of the marijuana activist group DC Cannabis Coalition (DCMJ) in Washington DC, told WUSA9 that the free inaugural pot is a "message [that] it's time to legalize cannabis at the federal level."

DCMJ triumphed with DC voters in the 2014 approval of its Initiative 71, legalizing the growth, possession, use, and gifting (but not sale) of small amounts of marijuana within the nation's capital. As long as Eidinger and his fellow stoners do not attempt to sell their gifts, they are not breaking any laws.

Eidinger mentioned that he will encourage recipients of the 4,200 free joints to light up four minutes and twenty seconds into President Trump's inauguration speech (420 being a casual code for marijuana). The use of marijuana is legal in DC but federal law still considers the use of the plant a crime, and so consuming it on federal property remains an arrestable, federal offense.

Eidinger understands that his plan is "a form of civil disobedience," but remarked, "I think it's a good protest. If someone wants to do it, they are risking arrest, but it's a protest and you know what, the National Mall is a place for protest."

Unlike most other protests planned for inauguration day, DCMJ representatives say that they are not protesting Trump or the ceremony surrounding his ascension to the presidency. "If there are people from Texas, some Cowboys fan, who is walking down the street in a cowboy hat and a big fur coat and he walks up to our demonstration, I want him to feel welcome coming to DC," Eidinger said. "It's not an anti-Trump event as much as it is anti-prohibition."

Marijuana activists are concerned that the incoming administration will take a less-friendly stance to the legalization of the plant. Alabama Republican Senator Jeff Sessions, who Trump intends to nominate for US Attorney General, has taken a hardline stance against marijuana. In April 2016, he notoriously declared that "good people don't smoke marijuana."

Sessions claimed that marijuana should not be legalized, as he believes that it is a gateway drug that leads to the use of stronger substances. In November Sessions said it was dangerous to "have the President of the United States of America talking about marijuana like it is no different than taking a drink… It is different….It is already causing a disturbance in the states that have made it legal."

Amid accusations from liberal outlets like Politico that Sessions would "dismantle more than a decade of progress," pro-marijuana congress members have questioned the notion that the Senator will undo the gains of the movement. California Republican Representative Tom McClintock, who opposes marijuana but supports legalization on the grounds that it removes the criminal element from the intoxicant's growth and sale, called Sessions a "strict constitutionalist who… will respect the prerogative of individual states to determine their own laws involving strictly intra-state commerce." In other words, McClintock believes that Sessions will put aside his personal dislike for marijuana and respect the decisions of state governments.

Eidinger said that DCMJ is hopeful that their cause will be advanced under President Trump, but they are "preparing for the worst."

000000
Popular comments
[he will encourage recipients of the 4,200 free joints to light up four minutes and twenty seconds into President Trump's inauguration speech (420 being a casual code for marijuana).] and Adolf Hitler's birthday, as well: 04/20/1889. The Doors - Light My Fire youtu.be/LY1l8T2Lcl0
double bonus
4 January 2017, 23:04 GMT
000000
Didn't his brother die from drugs, which is why he does not touch drugs or alcohol? Why can't they just let have one day enjoying themselves, without making it all about the needs of the Lefty Progressives?
anne00marie
4 January 2017, 23:05 GMT
000000
Newsfeed
0
New firstOld first
loader
LIVE
Заголовок открываемого материала
Access to the chat has been blocked for violating the rules . You will be able to participate again through:∞. If you do not agree with the blocking, please use the feedback form
The discussion is closed. You can participate in the discussion within 24 hours after the publication of the article.
To participate in the discussion
log in or register
loader
Chats
Заголовок открываемого материала
Worldwide
InternationalEnglishEnglishMundoEspañolSpanish
Europe
DeutschlandDeutschGermanFranceFrançaisFrenchΕλλάδαΕλληνικάGreekItaliaItalianoItalianČeská republikaČeštinaCzechPolskaPolskiPolishСрбиjаСрпскиSerbianLatvijaLatviešuLatvianLietuvaLietuviųLithuanianMoldovaMoldoveneascăMoldavianБеларусьБеларускiBelarusian
Transcaucasia
ԱրմենիաՀայերենArmenianАҧсныАҧсышәалаAbkhazХуссар ИрыстонИронауОssetianსაქართველოქართულიGeorgianAzərbaycanАzərbaycancaAzerbaijani
Middle East
Sputnik عربيArabicArabicTürkiyeTürkçeTurkishSputnik ایرانPersianPersianSputnik افغانستانDariDari
Central Asia
ҚазақстанҚазақ тіліKazakhКыргызстанКыргызчаKyrgyzOʻzbekistonЎзбекчаUzbekТоҷикистонТоҷикӣTajik
East & Southeast Asia
Việt NamTiếng ViệtVietnamese日本日本語Japanese中国中文Chinese
South America
BrasilPortuguêsPortuguese
NewsfeedBreaking
06:36 GMTThird of Swedish Police in Blighted Areas Have Mental Issues – Survey
06:27 GMTFormer US Defence Chief Mark Esper Sues Pentagon for 'Blocking' Parts of His Memoir
06:09 GMTPriti Patel to Hold Talks on Migration Crisis With European Ministers Despite French Snub
06:00 GMTKnow-How: Who Actually Made Scythian 'Gold'
05:59 GMTDenmark Bans Influencers From Advertising Cosmetic Surgery, Sugar Dating to Minors
05:51 GMTUK Convenes Urgent G7 Ministerial Meeting Over COVID Variant Omicron as WHO Urges Not to Panic
05:07 GMTMass Killer Breivik Sending Letters to Survivors With Excerpts From His Manifesto
04:47 GMTCOVID-19 Live Updates: Japan to Ban Travellers From Entering to Prevent Spread of Omicron Variant
03:46 GMTVideo: Jacksonville Jaguars Mascot Risks it All in Failed Stunt, Still Unable to Bring Luck to Team
03:39 GMTGOP Lawmaker Says Biden’s Social Spending Plan Would Allow IRS to 'Spy' on Americans
02:53 GMTMaduro Calls EU Observers at Latest Venezuelan Elections ‘Delegation of Spies’
02:43 GMT'Keep Livin': Matthew McConaughey Decides Not to Run for Texas Governor
02:36 GMTOver 2,000 People Protest Against COVID-19 Measures in Prague - Reports
02:19 GMT'French Trump' & Possible Presidential Candidate Zemmour Spotted Showing Middle Finger to Protester
01:28 GMTMarket Bull Expects US Fed to Raise Rates Six Times By 2024 Due to High Inflation
00:24 GMTRepublican Rep. Says Congress Leadership 'Needs to Change' as GOP Could Secure Southern Border
YesterdayFauci Tells Biden It Will Take 2 Weeks to Have Full Information on Omicron Strain
Yesterday‘Absolute Hubris’: Rand Paul Slams Fauci For Saying 'I Represent Science'
YesterdayRoger Stone Calls FBI 'Biden's Personal Gestapo' While Speaking of Jan. 6 Committee Subpoena
YesterdayJennifer Lopez Feels Her Reunion With Ben Affleck Is 'Truly Meant To Be,' Report Says