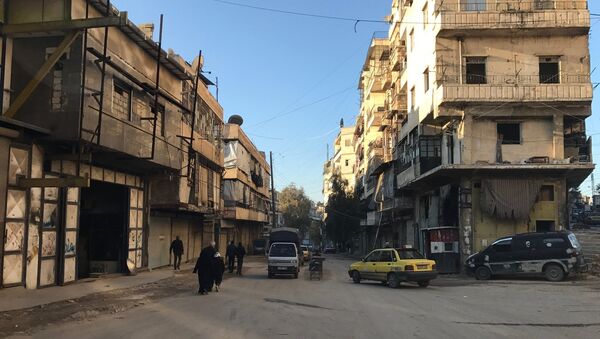 Now that Syria's Aleppo has been liberated, access for people to basic supplies and medical assistance is now being restored.

UNITED NATIONS (Sputnik) — Clean water supplies have already been restored for more than one million people in Aleppo, UN Humanitarian Coordinator for Syria Sajjad Malik said in a briefing on Wednesday.

“Over 1.1 million people once again have access to clean water in bottles or through tankers and wells,” Malik stated. “Mobile clinics are up and running, and more than 10,000 children have received polio vaccinations.”

Malik continued by stating that thousands of Syrian children liberated from rebels and Islamist extremists have not access to any school or education for up to five years, but are starting classes under the auspices of UN relief agencies.

"Thousands of children who have not been able to attend school need reintegrating into the education system through remedial classes to rebuild their confidence," Malik stated. "Getting them back to school is a huge challenge."

Hope Revives in Aleppo as People Return to Rebuild Their Homes - UN Envoy
Former inhabitants of Aleppo displaced by the five-year civil war, Malik noted, that reduced its population from four million to 1.5 million had already started to return and other relief programs were being set up and expanded to help them.

Malik pointed out that 20,000 people have received hot meals and more than 1,381 were moved to public hospitals.

United Nations relief officials and those from other bodies such as the Red Crescent and the International Committee of the Red Cross (ICRC) are now operating freely in liberated Aleppo, he added.

“The UN has presence in eastern Aleppo, moving around with no problems,” Malik said in a telephone press conference. “Registration [of the population] is going on. This is now a daily routine. We have presence in east Aleppo.”

Malik said a sense of security had returned to the city since its liberation from rebel forces dominated by Islamist extremists.

“We have not witnessed crackdowns or heard any reports,” Malik added. “The last four or five days have already made a huge difference. The guns were silent…[and] I saw many children out playing on the streets.”

The UN was focusing on immediate and urgent needs but would need a lot more resources to cope with the challenge of providing sufficient relief, Malik explained.