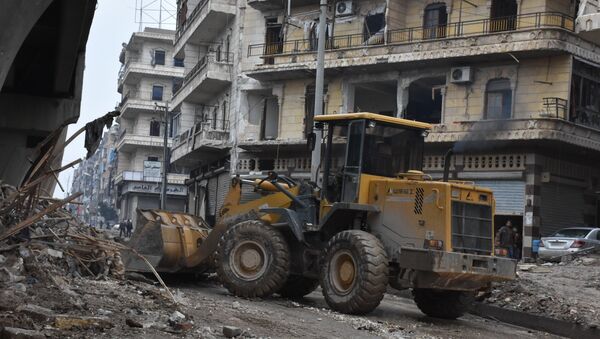 Last month, the brutal four year battle for Aleppo ended, and the Syrian government began the enormous task of rebuilding the city. Toward the end of the battle for the city, much of the mainstream media spent so much time covering the 'fall' of Aleppo that they forgot what happens afterward: rebuilding, restoration, and most importantly, peace.

Sputnik has obtained footage of the effort now underway to rebuild the completely ruined eastern portions of the city, most of them held by militants for four years until the sudden and unexpected victory of government forces last month.

Residents are shown rebuilding their homes, while small factories (those that hadn't been disassembled, looted and taken across the border to Turkey) are shown humming once again, producing what appear to be textiles and other goods.

Syrian Prime Minister Imad Khamis said recently that restoring the city's industrial potential was one of the government's main priorities. Before the war, Aleppo was the largest city in the country, and a major regional industrial hub, producing textiles, chemicals, pharmaceuticals, processed foods, and other goods. Aleppo accounted for over 50% of the country's manufacturing employment.

EXCLUSIVE: Sputnik Reports From Terrorist Chemical Factory in Aleppo (VIDEO)
Last month, Aleppo Province Governor Hussein Diab told Sputnik that the damage caused by the fighting was "terrible." Nevertheless, he stressed that life in the city is "gradually returning to normal life." He explained that the government is doing everything possible to get people to return to their homes in the liberated areas, thus alleviating the strains of internally displaced persons currently living in makeshift government-administered shelters outside the city.

The governor admitted that a lack of sufficient construction equipment was a big problem.

On December 16, the Russian Defense Ministry confirmed that Aleppo, previously split into the government-held western part and the militant-controlled eastern portion, had been completely liberated by the Syrian Army. Damascus has been in a state of war with a disparate agglomeration of mostly Islamist jihadist anti-government fighters since March 2011. On September 30, 2015, at the request of President Bashar Assad, Russia began providing military assistance to Syria against jihadist militants.