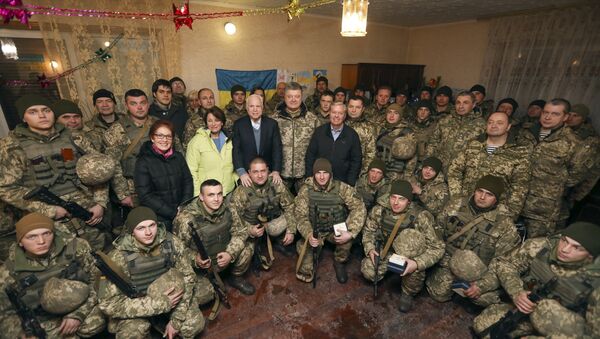 After an award ceremony, a group of Armed Forces of Ukraine soldiers spent a few hours in a chilly airport hangar in the country's east where they met the New Year, volunteer Olga Batagova said in her Facebook page.

Freudian Slip? Poroshenko Speaks of 'Temporary Ukrainian Occupation' in Donbass
The Russian news website Lenta.ru quoted Ukrainian volunteer Olga Batagova as saying in her Facebook page that Armed Forces of Ukraine servicemen, who had been decorated with medals earlier that day, were stranded for several hours at a cold airport hangar in the country's east as the clock struck midnight and 2017 commenced.

According to her, an award ceremony attended by none other than Ukrainian President Petro Poroshenko was held on December 31 to give kudos to 15 soldiers who had distinguished themselves in the fighting for the town of Debaltsevo.

The soldiers were delivered to the ceremony from the frontline in open-top military trucks, Batagova said, adding that the servicemen were forced to drill ahead of the award ceremony. 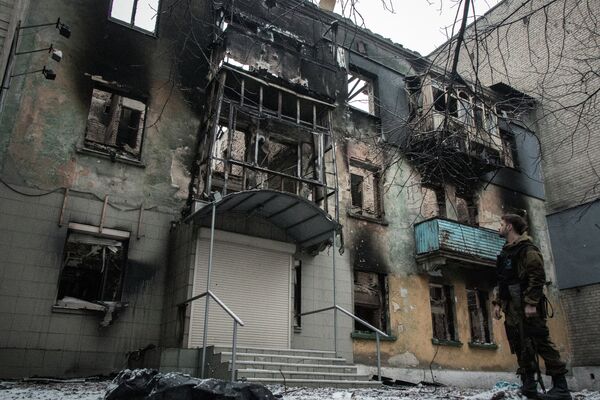 The cold, tired soldiers were then ordered to stay at an airport hangar, where they finally "celebrated" New Year's Day.

The lamentable conditions of the award ceremony were also relayed by Valeriya Burlakova, a mortar crew commander.

Lenta.ru quoted her as describing the grueling process as "two hellish days in the cold," with hot coffee served only for top brass. Poroshenko failed to deliver on his promise to transport the soldiers back to the front by helicopter; in the end, the aircraft was used by "more important people."

The soldiers, for their part, heard explanations about the alleged no-flying weather, Burlakova said. 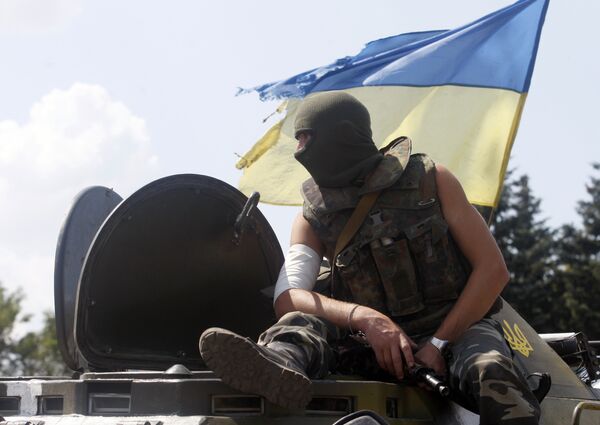 An Ukrainian soldier sits on the top of an APC at a checkpoint in the eastern city of Debaltsevo. File photo
© AFP 2022 / ANATOLII STEPANOV

Between December 18 and December 19, the Armed Forces of Ukraine launched active combat operations near the city of Debaltsevo.

On December 21, Andrey Marochko, a representative of the People's Militia from the self-proclaimed Lugansk People's Republic, said that at least 40 government troops were killed and 50 more wounded after they tried to break through the militia's defenses in the area of Debaltsevo.

Debaltsevo, located between the cities of Donetsk and Lugansk, is among the towns in eastern Ukraine's Donbass region that has been controlled by the Donetsk People's Republic since the beginning of 2015.

Ukraine 'Should Brace Itself for the Worst' When Trump Comes to Power
Kiev has been conducting a military operation against supporters of Donbass independence since spring 2014. Donetsk and Lugansk refused to recognize the overthrow of Ukraine's democratically-elected government and declared their sovereignty.

The Minsk deal to reconcile the conflict in Ukraine was drafted in February 2015 by Russia, Ukraine, Germany and France and later signed by Kiev and the self-proclaimed republics of Donetsk and Lugansk. Both warring parties have repeatedly accused each other of violating the truce despite agreeing to the ceasefire deal.