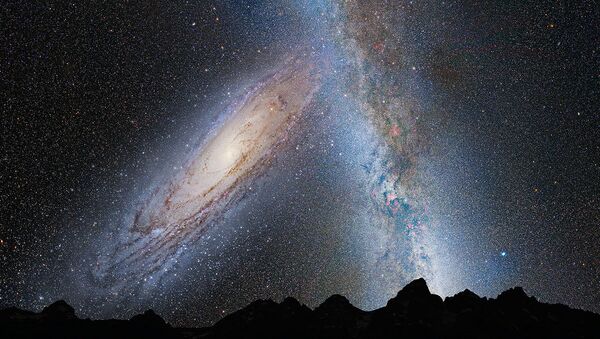 A team of Russian scientists has come up with an explanation for the discrepancies between modern cosmological theory and data gathered by the Planck Telescope. According to the scientists, the differences reveal that the universe had more dark matter previously than it does now.

Planck’s Early Universe Exploration 'Great Landmark' in Human History – Astrophysicist
The Planck Telescope, a space observatory launched in 2009 and decommissioned in 2013, accurately measured fluctuations in the temperature of the cosmic microwave background, which scientists often refer to as the ‘echo' of the Big Bang, the moment when the universe came into being.

However, after Planck's measurements were inserted into physicists' sophisticated calculations, unexpected results occurred, and that difference was too large to be considered within the margin of error. In particular, a theoretical figure known as the Hubble parameter, describing the rate of the expansion of the universe, and another parameter associated with the number of galaxies in clusters, both varied significantly with actual data obtained from observations.

"We are either dealing with some kind of unknown error, or the composition of the ancient Universe is considerably different to the modern Universe," said Igor Tkachev, head of the Department of Experimental Physics at Institute for Nuclear Research of the Russian Academy of Sciences (INR).

Tkachev, alongside colleagues Dmitry Gorbunov and Anton Chudaykin from the Moscow Institute of Physics and Technology and Novosibirsk State University, detailed a hypothesis that the discrepancy happened because of a change in the amount of dark matter in the universe.

Dark matter is not observable in optical or electromagnetic wavelengths, but creates a measurable gravitational impact. According to scientists, there is much more dark matter in the universe than there is ordinary matter, including the elements.

Universe’s Dark Matter Might be 'Smoother' than Previously Thought
It turns out that some of that dark matter, all of which was created in the Big Bang, is unstable. Hundreds of thousands of years after the Big Bang all of the dark matter was still in existence, but since then the unstable dark matter had disappeared, decaying into neutrinos or other, hypothetical relativistic, particles. All that dark matter influenced the creation of the universe in the beginning, as common matter formed atoms, predominantly hydrogen. But now, according to the scientists, after the unstable dark matter disappeared, key cosmological parameters are different from what they were billions of years ago.

Interestingly, the Russian scientists calculated how much dark matter has disappeared since the era in which hydrogen was formed. Using data from observations of various cosmological effects, the researchers determined that somewhere between 2-5 percent of all dark matter has been of the unstable variant. When these 2-5 percent are introduced into calculations, theoretical models and our observations of the universe become much more coherent.

However, the scientists have left room for improvements in their model.

"We are not currently able to say how quickly this unstable part decayed," said Tkachev.

"Dark matter may still be disintegrating even now, although that would be a different and considerably more complex model," he added.