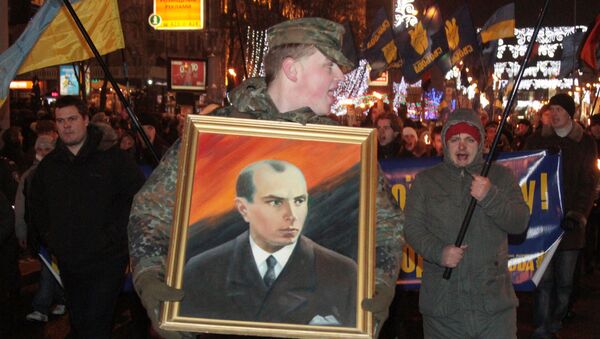 © Sputnik / Grigoriy Vasilenko
/
Go to the photo bank
Subscribe
More than 1,000 supporters of the Ukrainian nationalist party Svoboda turned out for a torch-lit march in Kiev on Monday to mark the 108th birthday of Stepan Bandera, a WWII nationalist leader and Nazi collaborator.

The march wrapped up with a rally on the capital’s main Independence (Maidan) square. The participants were seen waving Ukrainian and Svoboda flags and banners reading: "Down with the Second Khazar Khaganate!" and "Nationalism is our religion. Stepan Bandera is our prophet!"

Many were holding torches and portraits of Bandera.

Kiev police earlier said that the march would be guarded by 700 law enforcement officers, including 250 National Guardsmen.

Similar rallies, though on a smaller scale, were held in Odessa and several other cities across Ukraine.

Nationalist historians in Ukraine claim that it was not only the Soviet Army but the German Nazis too that Stepan Bandera fought against during WWII.

“However, German officials insist that their archives make no mention of any losses the Wehrmacht ever suffered fighting Bandera’s OUN-UPA forces. I am sure that the Ukrainian Nazis and Bandera’s spiritual heirs will face a new Nuremberg trial and much sooner than they think,” Aksyonov wrote.

He also mentioned Poland’s recent demand for Kiev not to celebrate the 75th anniversary of the Ukrainian Insurgent Army (UNA), banned in Russia.

Stepan Bandera was one of the founders of the Ukrainian Insurgent Army, or UPA, that collaborated with Nazis and fought against the Red Army during the Second World War.

‘Dark Chapter’: Poland Mulls Demolition of Bandera, UPA Monuments
Аfter the defeat of German Nazism in 1945, members of the UNA and the paramilitary UPA units continued their struggle against the Soviet Union.

​While many WWII veterans and modern-day politicians condemn the campaign of glorification of Stepan Bandera and his Nazi collaborators, some people, mostly in western Ukraine, tout him as a national hero.

000000
Popular comments
Banderites try their best to look scary but they will never receive the same financial support Hitler did building his war machine. Fascism is weak sauce compared to the new islamic terrorism hotness. Take a picture of these freaks before they vanish into the Euro wilderness.

AnomicDust
2 January 2017, 15:50 GMT
000000
Watch and learn (they wont) what turns seemingly ordinary people into murderers and arsonists. Eurofag and the ukronazi diaspora in the US/Canada, who constantly fan the flames with indoctrination, should be ashamed. Hopefully Trump will cut governmental funding to the domestic breeding grounds of these freaks