Russian Confronted in Indonesia Over T-Shirt With Hammer and Sickle 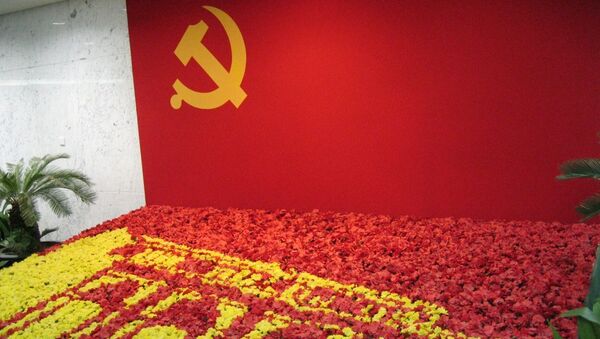 © Flickr / z_fishies
Subscribe
A Russian citizen was confronted and briefly detained in Indonesia for wearing a t-shirt emblazoned with a hammer and sickle, an international symbol of communism and the best recognized symbol of the former Soviet Union.

Indonesia Rethinks Ukrainian-Built Combat Vehicle After Unsuccessful Trial
Igor Riabchuk, a Russian national, was accosted by a group of local people in Batam, Indonesia, December 31, for wearing a t-shirt with the communist symbol.

The people turned out to be members of an organization that calls itself Children of the Red Beret Command (AKBM); the group tried to explain to Riabchuk that he was violating Indonesian law by wearing a communist symbol, but could not overcome the language barrier. Unable to communicate with Riabchuk, who can only speak Russian, not English or Indonesian, the locals took him to a police station by force, where he was detained.

According to Riau Islands Police spokesman Saptono Erlangga, the police decided to detain Riabchuk "for his own safety."

"He can only speak Russian so he didn't understand why these people approached him," said Saptono.

Later, the police confiscated the t-shirt, which Riabchuk had bought in Vietnam, and returned Riabchuk to his hotel.

"He's only a tourist. [There was] no political motive," said Saptono.

Poland’s Sejm Suspends Work on Draft Law Banning Propaganda of Communism
Riabchuk is reportedly the third person to be detained in Indonesia for wearing communist symbols. According to police reports, one citizen of Singapore was detained for wearing a similar t-shirt. His t-shirt was also confiscated by the police, and he was subsequently released without charge.

A local taxi driver who was heading to a New Year's eve party, ended up having to spend the night at the police station for the offensive sign.

Communism has been officially banned in Indonesia for more than 50 years and this ban is unlikely to be lifted any time soon. According to Indonesian law, a person promoting communism may end up in jail for up to seven years.

The ban was imposed after Suharto became president following a US-backed coup against the progressive government of Sukarno in 1965. Following the coup, Suharto carried out a nationwide purge of communism known as the Indonesian Genocide. The death count from the purge is estimated to be between half a million to 1 million people. The Indonesian Communist Party-the third largest in the world at the time-was systematically destroyed.

000000
Popular comments
I don't have as much sympathy for the left as I used to. Thanks, DNC.
jas
3 January 2017, 03:13 GMT1
000000
The DNC will have to seriously rethink itself before I'll be willing to make that my pick of the poisons.
Darrell R
3 January 2017, 03:35 GMT1
000000
Newsfeed
0
New firstOld first
loader
LIVE
Заголовок открываемого материала
Access to the chat has been blocked for violating the rules . You will be able to participate again through:∞. If you do not agree with the blocking, please use the feedback form
The discussion is closed. You can participate in the discussion within 24 hours after the publication of the article.
To participate in the discussion
log in or register
loader
Chats
Заголовок открываемого материала
Worldwide
InternationalEnglishEnglishMundoEspañolSpanish
Europe
DeutschlandDeutschGermanFranceFrançaisFrenchΕλλάδαΕλληνικάGreekItaliaItalianoItalianČeská republikaČeštinaCzechPolskaPolskiPolishСрбиjаСрпскиSerbianLatvijaLatviešuLatvianLietuvaLietuviųLithuanianMoldovaMoldoveneascăMoldavianБеларусьБеларускiBelarusian
Transcaucasia
ԱրմենիաՀայերենArmenianАҧсныАҧсышәалаAbkhazХуссар ИрыстонИронауОssetianსაქართველოქართულიGeorgianAzərbaycanАzərbaycancaAzerbaijani
Middle East
Sputnik عربيArabicArabicTürkiyeTürkçeTurkishSputnik ایرانPersianPersianSputnik افغانستانDariDari
Central Asia
ҚазақстанҚазақ тіліKazakhКыргызстанКыргызчаKyrgyzOʻzbekistonЎзбекчаUzbekТоҷикистонТоҷикӣTajik
East & Southeast Asia
Việt NamTiếng ViệtVietnamese日本日本語Japanese中国中文Chinese
South America
BrasilPortuguêsPortuguese
NewsfeedBreaking
09:07 GMTInformation Attacks on Sputnik V Become More Frequent, RDIF Says
09:01 GMT'Gotta Be a New Record': Joe Biden Appears to Say He Rode Amtrak as VP For 36 Years
08:24 GMTRussian Scientists Have Come Up With a New Way of Protecting Against Strikes and Explosions
07:46 GMTDenmark Searching for Diamonds on Greenland Seabed on Behalf of International Gem Giant
07:45 GMTHunter Biden Reportedly Offered US Company $80,000-Worth of Info on Russian Businessman Deripaska
07:21 GMTFrance Hints at Possible Financial Sanctions Against Poland Over Controversial Constitutional Reform
07:18 GMTMoscow to React to Ukraine's Possible NATO Entry, Sees It as Dangerous Step, Deputy FM Says
07:08 GMTIndian Air Force Mirage 2000 Crashes in Madhya Pradesh, Pilot Ejects - Videos
06:58 GMTHundreds Leave Church of Finland After Bishop's Urge to Vaxx
06:43 GMTKremlin: Putin's Big Press Conference Planned for December
06:32 GMTUS Anti-War Activist Says Ex-Wife Contacted by FBI Over His Russia, Venezuela Trips
06:30 GMT'We Never Give Up!' Cristiano Ronaldo Sends Message to Fans After Man United's Champions League Win
06:23 GMTIndia Decides to Deploy More Troops in Kashmir Amid Spike in Violence
06:22 GMT'Untruth Unsocial': Indian MP Takes a Swipe at Donald Trump’s Planned Social Media Network
06:19 GMTIndia Hails 'Historic' One Billion Covid Vaccination Milestone in Nine Months
05:59 GMTIran's Nuclear Programme and Peace With The Palestinians Don't Bother Israelis; What Does?
05:54 GMTUK Gov't 'Mulls COVID Plan C' to Keep Economy Open Amid Warning New Daily Cases May Reach 100,000
05:44 GMTPolice Probe Reports of Women Being Spiked With Needles in Scotland
05:37 GMTNorwegian Fertiliser Giant Warns of Famine Due to High Gas Prices in Europe
05:13 GMTNew Coronavirus Variant AY.4.2 Found in Russia, It May Spread, Rospotrebnadzor Watchdog Says