Israel Will No Longer Return Bodies of Hamas Soldiers 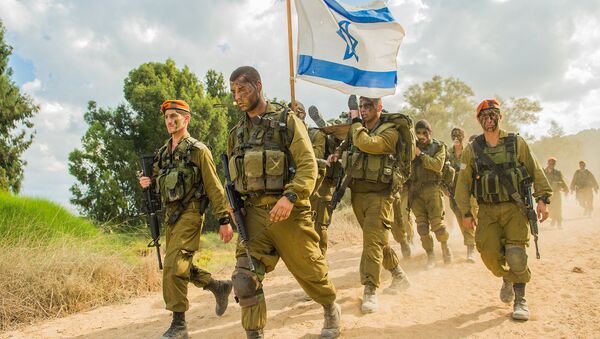 © Flickr / Israel Defense Forces
Subscribe
Israel will no longer return the bodies of Hamas militants killed in clashes with the state, a move Hamas slammed as "barbaric."

The Israeli prime minister's office announced the decision January 1, a day after Hamas's release of a video showing a mock birthday party for missing Israeli soldier Oron Shaul. Israel believes Shaul and another soldier, Hadar Goldin, were killed in the 2014 Gaza war and that Hamas is holding their remains. They also believe Hamas to be holding two Israeli civilians who crossed into Gaza on their own.

What's Behind Washington's Decision Not to Veto UN Resolution on Israel

Both Hamas and the parents of the Israeli soldiers have criticized the move.

"We won't give a medal to those who decide to do too little too late," the Goldins said in a statement, the Times of Israel reports. They pointed out that it is the responsibility of the prime minister to enforce any new means of leverage against Hamas, and called for "stronger and more stringent" steps against the group.

"These decisions will not give positive results," he said, Deutsche Welle reports. He would not say what actions the group might take in responses.

The videos posted by Hamas's military arm, the Al-Qassam Brigades, marked three years of "captivity" for the soldiers. In one of them, an obviously doctored image of Shaul sits in front of a birthday cake; Israeli Prime Minister Benjamin Netanyahu, dressed as a clown, enters the room. The video ends with the message, "The decision is in the government's hands," according to the Times of Israel.

In the other, a group of faceless captured soldiers bang tin plates as voices sing "Happy Birthday."

According to its army, Israel returned 102 bodies to Hamas for burial in 2016. Now, any bodies its army captures will be buried immediately, but may be exhumed and returned if Hamas agrees to deals. Israel has in the past buried the bodies of its enemy's fallen in secret, remote locations.

In September, Hamas denied rejecting an Israeli offer to return 19 bodies from the 2014 conflict and free 18 Palestinians in exchange for Shaul and Goldin's remains.

000000
Popular comments
"They also believe Hamas to be holding two Israeli civilians who crossed into Gaza on their own." This would be the "passage of rites" that Jewish teenagers get involved with. They cross over into Palestine with mischief in mind against Palestinians. It is akin to the American Indians who, while in battle, would make contact with their enemies, notably white men, with a coup club while the latter were still alive and capable of fighting. It was said that it emboldened the warrior Spirit in him. Any "missing of Israel citizens" in Palestine is because they got caught sneaking into Gaza. These "missing citizens" have caused a great deal of the trouble in the past between the two. Would I give hem back? Sure I would, but after I put an indelible flag on their asses. It works both ways over there, so cut the crap.
marcanhalt
3 January 2017, 03:04 GMT
000000
ISRAEL is becoming worst than the NAZI'S. And is dangerous. All countries return the dead. And will see this as worst than Terrorists. Even terrorists may return the dead. IF asked to. TRUMP MUST be careful and FORGET BOLTON , or it will end worst than a LAME DUCK. Mc Cain is mad with Russia, because V Nam clipped his wings. Reportedly he have troubles cleaning up after every bath visit. Oh well. Or perhaps PUTIN resembles some Soviet Officer of the days.
cast235
3 January 2017, 07:15 GMT
000000
Newsfeed
0
New firstOld first
loader
LIVE
Заголовок открываемого материала
Access to the chat has been blocked for violating the rules . You will be able to participate again through:∞. If you do not agree with the blocking, please use the feedback form
The discussion is closed. You can participate in the discussion within 24 hours after the publication of the article.
To participate in the discussion
log in or register
loader
Chats
Заголовок открываемого материала
Worldwide
InternationalEnglishEnglishMundoEspañolSpanish
Europe
DeutschlandDeutschGermanFranceFrançaisFrenchΕλλάδαΕλληνικάGreekItaliaItalianoItalianČeská republikaČeštinaCzechPolskaPolskiPolishСрбиjаСрпскиSerbianLatvijaLatviešuLatvianLietuvaLietuviųLithuanianMoldovaMoldoveneascăMoldavianБеларусьБеларускiBelarusian
Transcaucasia
ԱրմենիաՀայերենArmenianАҧсныАҧсышәалаAbkhazХуссар ИрыстонИронауОssetianსაქართველოქართულიGeorgianAzərbaycanАzərbaycancaAzerbaijani
Middle East
Sputnik عربيArabicArabicTürkiyeTürkçeTurkishSputnik ایرانPersianPersianSputnik افغانستانDariDari
Central Asia
ҚазақстанҚазақ тіліKazakhКыргызстанКыргызчаKyrgyzOʻzbekistonЎзбекчаUzbekТоҷикистонТоҷикӣTajik
East & Southeast Asia
Việt NamTiếng ViệtVietnamese日本日本語Japanese中国中文Chinese
South America
BrasilPortuguêsPortuguese
NewsfeedBreaking
13:22 GMTUK Tory Hosted ‘Reckless’ Xmas Bash as Downing Street COVID-Breaching Party Scandal Gathers Steam
13:20 GMTUS Will Unveil Investments to Back Independent Media Across World at Summit for Democracy
13:19 GMTElon Musk Teases Looming Human Trial Of Neuralink's Brain Chip Pending FDA Approval
12:49 GMTChina Warns Canada of Investment Exodus if It Believes Huawei Risks 'Invented' by US
12:48 GMTLondon Airbnb Owner Told Swedish Renter 'I Hope You Didn't Do It' After Christmas Eve Murder
12:43 GMTRussian Fighters Scrambled to Escort French Rafale, Mirage Jets Over Black Sea
12:07 GMTBoris Johnson 'Sickened' by Leaked Video of No 10 Staff Joking About Lockdown Christmas Party
12:04 GMTRussia's Navalny Files 5th Lawsuit Against Prison in Pokrov
11:58 GMTBaltics to Completely Disconnect From Russian Power Grid by 2025, Lithuanian Energy Minister Says
11:46 GMTSaudi Man Wrongly Detained in France in Connection With Khashoggi Murder Released
11:29 GMTFootball Greats Hail Mohamed Salah as Liverpool Striker Hits 34-Year Goal-Scoring Record
11:24 GMTSocial Media Uproar After Women 'Stripped & Assaulted' in Pakistani Market – Video
11:15 GMTUK to Turn Off 2G, 3G Mobile Phone Networks by 2033
11:11 GMTIndian Netizens 'Jealous' as UAE Announces 4.5-Day Work Week
11:00 GMTTiming of Next Putin-Biden Contact Not Yet Determined, Kremlin Says
10:56 GMTBelarus Brings Charges Against Russian Citizen Arrested During Ryanair Flight Stopover
10:56 GMTIndia 'Could Be Attacked From All Fronts', China Poses a 'Significant Challenge', IAF Chief Warns
10:54 GMTBlack Sea Fireball: Meteor's Flashy Descent Caught on Video in Russia
10:50 GMTMan Arrested After Setting Christmas Tree on Fire Near Fox News Headquarters in NYC - Video, Photo
10:36 GMTUS Claims It’s Thwarted Multiple Iranian Attempts to Smuggle Weapons, Oil to Yemen, Venezuela