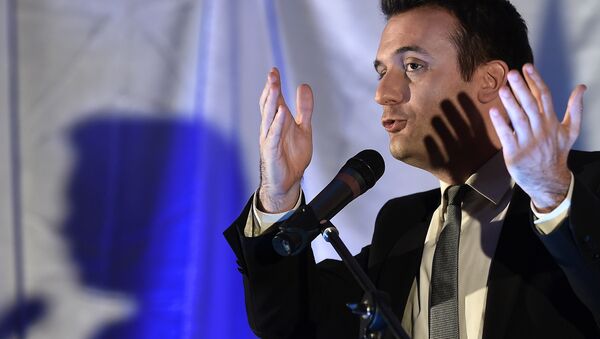 France needs to better protect its sovereignty at maritime borders amid cross-border drug trafficking and an inflow of undocumented migrants, Vice President of the French far-right National Front party Florian Philippot said Monday in a statement.

French Republicans See No Threat From Socialists, National Front at Elections
MOSCOW (Sputnik) — According to the National Front member, the current socialist government has weakened the maritime border security, so faster delivery of new vessels is needed, as well as the deployment of new drones and planes.

"This situation is unbearable on an enormous territory of 11 million of square kilometers [approximately 4.2 million square miles] and filled with considerable resources: the number of breaches is growing, the drug trafficking is flourishing, and illegal immigration is speeding up. The sovereignty of France has to be reaffirmed urgently!" Philippot said in a statement.

In December 2016, Chief of Staff of the French Armed Forces Gen. Pierre de Villiers urged French government to increase military spending to the 2 percent of GDP, as required by NATO. French President Francois Hollande said later in December that France had the necessary resources to boost its military expenditure.

According to NATO July 2016 figures, France was spending 1.78 percent of its GDP on defense.