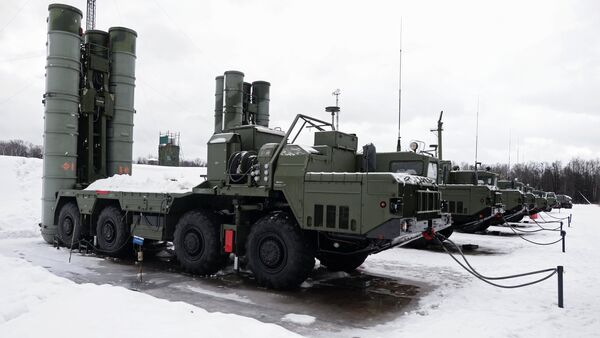 © Sputnik / Mikhail Voskresenskiy
/
Go to the mediabank
Subscribe
International
India
Africa
The reserved reaction by the Kremlin to President-elect Donald Trump’s suggestion that the United States should upgrade its nuclear arsenal proves that in the contemporary military and economic reality Russia will not change its defense strategy, read a report by American intelligence company Stratfor.

World
'Russia Will Focus On Affordable Asymmetric Measures' if NATO Wants Arms Race
In late-December, Trump wrote on his Twitter account that the US had to "greatly strengthen and expand its nuclear capability until such time as the world comes to its senses regarding nukes."

"As for President-elect of the United States Donald Trump [and his comment on nuclear enhancement], there is nothing new. During his election campaign, he spoke about the necessity to strengthen US nuclear capabilities, its army, this is not surprising," Russia President Vladimir Putin commented during a major year-end press-conference.

In recent years, the US and Russia have significantly invested in building up their defense capabilities.

US to Remain Committed to NATO During Trump Presidency - Senator McCain
Washington is taking measures to strengthen NATO forces along the Eastern European flank. It launched a missile-defense system in Romania in May and plans to expand NATO troop rotations next year. The US is also implementing a $350 billion plan to upgrade all components of its nuclear weapons triad.

In response to the NATO military buildup, Russia has deployed a tank army along its western border. In November, Moscow announced it will deploy S-400 Triumf missiles and Iskander missile systems to the region of Kaliningrad.

"But Russia is attempting to shape its strategic one-upmanship to today's reality and not repeat Cold War mistakes. […] Global proxy wars played a significant role in Moscow's Cold War calculations, but its tactics today are more focused on struggles closer to home. NATO remains a top concern, as evidenced by the steps Moscow is taking to shore up its military position, but Russia can afford to go only so far in its push against the West," the report read.

Trump Inherited Nuclear Arms Race From Obama, But Ready to Negotiate With Putin
In 2017, Moscow plans to increase its military budget to $60 billion. However, US military spending still exceeds that figure tenfold.

"But Russia's decision to keep half of its 2017 federal budget secret means that the true amount it spends on defense is unknown," according to the report.

The authors of report suggested that keeping part of the budget secret enabled the Kremlin to be more flexible in putting additional money to the defense industry without rising social tensions amid the economic crisis.

However, "its budget-shifting ability still would not afford the Kremlin the ability to engage in the kind of arms race that defined the last years of the Cold War and helped bankrupt the Soviet Union," the report read.

According to Stratfor, the Kremlin still looks back at that Soviet "legacy" when making decisions on defense.

"Russia's more moderate tone does not mean it will pull back on its defense plans, but rather that the Kremlin does not want to repeat a history of military overspending that helped accelerate the demise of the Soviet Union," the report read.

First, there are a growing number of differences within the European Union, and Europe’s unanimity, especially on anti-Russian sanctions, is now being undermined.

Moreover, the Kremlin hopes that after Trump’s inauguration on January 20 the US and Washington could start dialogue to ease bilateral tensions.

"So Russia will maintain its strategic position against the United States and its allies while trying to ensure that the tensions with them remain manageable," the report read.