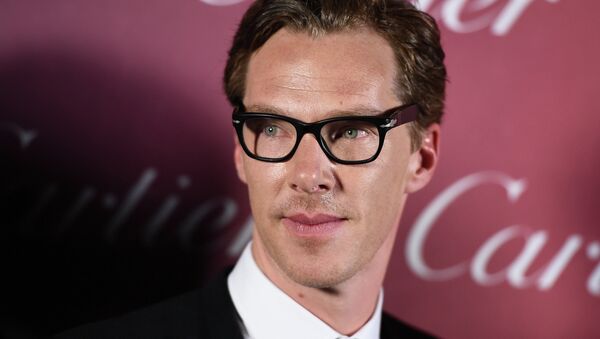 © AP Photo / Jordan Strauss/Invision
Subscribe
British actor Benedict Cumberbatch, who plays the role of Sherlock Holmes in the popular British TV series "Sherlock," has turned out to be a distant relative of Sir Arthur Conan Doyle, the author of the original detective stories.

The finding was made by experts of the American Ancestry company which deals with creating family trees.

According to the company, the common ancestor of the writer and the actor is John of Gaunt — the first Duke of Lancaster and one of the sons of the King of England, Edward III (1312-1377). Gaunt was Cumberbatch's 17th great-grandfather and Conan Doyle's 15th great-grandfather, experts said.

"How rare that an actor in a major series has the chance to play a character created by a relative, especially one as iconic as Sherlock Holmes," the company's representative Jennifer Utley told Reuters.

Why It Is Dangerous to Watch 'Game of Thrones' in Turkey
According to researchers, the 40-year-old actor did not send any request to the company to create his family tree. The initiative came from Ancestry employees themselves who are the fans of the actor and the Sherlock" TV series, Reuters wrote.

The funny thing is that this is not the first time when Ancestry has found Cumberbatch's prominent relatives. Earlier, before the release of the biographical thriller The Imitation Game the company revealed Cumberbatch's links to the revolutionary computer scientist Alan Turing, whom he played in the movie.

The researchers even joked that Cumberbatch seems to have a good chance to be a relative of his other fictional characters.

"What's next? Learning that Benedict Cumberbatch is the great-great-grandson of Sherlock Holmes? OK, Holmes is a fictional character, but at this rate, someone's bound to find a way," the company's website wrote.

"Sherlock" is one of the most popular TV shows in Britain. The show has been broadcasted in 180 countries.