Russia, US Have All Preconditions to Resolve Deadlock in Relations 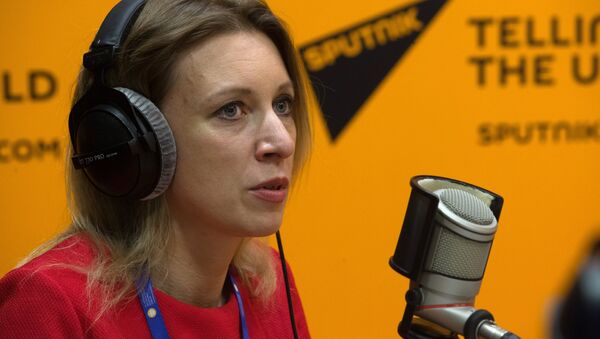 There are all necessary perquisites to break the stalemate in the US-Russian relations, which has occurred as result of efforts of the outgoing US administration, Russian Foreign Ministry spokeswoman Maria Zakharova told Sputnik on Saturday.

MOSCOW (Sputnik) – Zakharova stressed that the US decisions restricting the interstate work could only result in making the US-Russian relations more complicated.

"… We will work with any [US] team. We base on the assumption that, of course, it is necessary to resolve the deadlock in the US-Russian relations, which occurred due to the previous US administration, and there are all perquisites for this," Zakharova said, adding that Russian stance is to work with its US partners no matter how tough they are.

US Dems' Recent Decisions Revenge for Trump's Election Victory - Moscow
On Thursday, outgoing US President Barack Obama announced the expulsion of 35 Russian diplomats, the closing of two Russian diplomatic compounds and new sanctions against six Russian individuals and five entities over Moscow's alleged interference in the November US presidential election, which the Kremlin has denied. Russian President Vladimir Putin said Moscow would not expel anyone in response to US actions.

The contacts between Moscow and the administration of Trump will begin following his inauguration, Russian Foreign Ministry spokeswoman Maria Zakharova told Sputnik.

"We, as the Foreign Ministry, can work with a team which represents the authority, meaning it has been approved. So we are waiting for the new administration to arrive at the White House, and then we will be ready to work with them," Zakharova said.

She added that once Trump takes the office, a number of bilateral meetings, including between Russian Foreign Minister Sergey Lavrov and the US state secretary, would be scheduled.

The inauguration of the US president-elect will take place on January 20.