Will 'Grave Crisis' in US-Turkey Relations Affect Incirlik, Home to US Nukes? 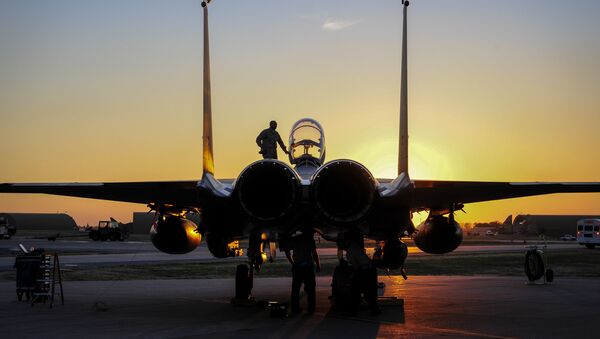 © Flickr / U.S. Department of Defense
Subscribe
Ankara appears to be changing its opinion with regard to US military installations in Turkey, including the Incirlik air base, political analyst and former Turkish MP Dr. Oya Akgonenc Mugisuddin told Sputnik. The base, which houses US B61 nuclear bombs, is key to Washington's military operations in the Middle East.

"New ideas on how to use [these bases] have surfaced. Turkey is extremely discontent with America's activities [in the Middle East] and their implications. Turkish authorities [are pondering] certain changes," he said.

Dr. Oya Akgonenc Mugisuddin, an advisor to the Chairman of the Felicity Party, further said that Turkish President Recep Tayyip Erdogan's comments on Washington's support of terrorists in Syria had merit. Erdogan has recently said that Turkish authorities have photo and video evidence of the US-led coalition providing assistance to terrorist groups in Syria, including Daesh.

"Turkey's military campaign in Syria, known as Operation Euphrates Shield, has exposed the real state of affairs. It turned out that the United States told us one thing, while doing something completely different. The West was convincing us that it was fighting against Daesh. However, the aviation of the US-led international coalition did not respond to our numerous requests to destroy Daesh targets, which we located," he said.

This prompted Dr. Oya Akgonenc Mugisuddin to say that Erdogan's remarks are "rather justified" and that they reflect what is truly happening.

What Turkey's Incirlik Military Base Has to Do With the Nuclear Arms Race
Ankara launched Operation Euphrates Shield on 24 August to push Daesh out of cities and settlements located on Syria's border with Turkey. The military intervention has also been aimed at preventing the Kurdish forces from moving further west and taking the border region under control.

Erdogan and his supporters have been concerned that the Syrian Kurds are trying to achieve greater autonomy in northern Syria, sparking unrest in southeastern Turkey.

Dr. Oya Akgonenc Mugisuddin observed that relations between Turkey and the United States are in "grave crisis," adding that what Americans say runs counter to what they do.

"If they are not helping us in our fight against Daesh and sending weapons to terrorists, one cannot but ask against whom and what for is the United States fighting in Syria?" he noted. "Clearly, what is happening in the region and what role the United States has played in these destructive processes raises many questions."

000000
Popular comments
It's looking like the Gulen gang shot down the Russian Su-24 and Erdogan couldn't just come out and say that he didn't have full control of his PM and military. That could have made it much worse.
jas
30 December 2016, 14:08 GMT1
000000
Stab in the back for NATO.