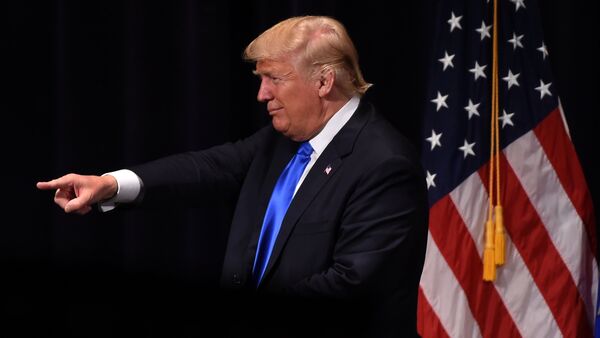 US President-elect Donald Trump has made clear he is determined to honor his campaign promises to seek a new era of better relations with Russia, but he faces enormous opposition from US intelligence and military leaders and bipartisan hawks in the Congress who are already trying to undermine his designs before he even enters office.

New Obama's Sanctions on Russia 'Last Challenge' to Trump
WASHINGTON (Sputnik) — Detractors, primarily neoconservative and globalist warmongers, will oppose any efforts on Trump’s part to lift anti-Russian sanctions, cut-off support to Ukraine or reduce US contributions to NATO and will try to prevent Washington from cooperating with Moscow in Syria, among other areas.

On December 29, President Barack Obama announced the expulsion of 35 Russian diplomats, the closing of two Russian diplomatic compounds and new sanctions against six Russian individuals and five entities, including Russia's Main Intelligence Directorate (GRU) and the Federal Security Service (FSB), over Moscow's alleged interference in the November US presidential election, which the Kremlin has denied.

The new sanctions, experts told Sputnik, were motivated by Obama's desire to appease anti-Russia sentiment within the US Congress and to influence Trump's future relations with Moscow.

"Obama is trying to make sure that Trump won’t back off on [anti-Russian] sanctions easily because it appears that Trump would be going against secret services on this issue," president of the American Institute of Business and Economics in Moscow, Art Franczek, told Sputnik.

"I’ve never seen a president try to create more problems for a future president," Giuliani told Fox News. "Why didn’t he [Obama] do something about it 18 months ago?"

Russian President Vladimir Putin refused to retaliate punitively to Obama’s move by banning US personnel, a decision Trump looked on with approval.

"Great move on delay (by V. Putin) — I always knew he was very smart!" Trump tweeted on December 30.

Anti-Russian hawks in the US armed forces are backed by a dominant bipartisan coalition on Capitol Hill led by Republican senators John McCain and Lindsay Graham, along with Democratic leaders like Senator Ben Cardin, who will oppose Trump on issues related to Ukraine, Syria and NATO, to name a few.

Trump has continued to insist in speeches since his election victory on November 8 that he wants the United States to "abandon the failed policy of nation building and regime change" around the world.

With New Sanctions, Obama 'Plants a Bomb Under Trump's Ties With Russia'
This could have immediate consequences for the anti-Russian governments of Ukraine and Georgia that have felt confident in the unconditional support of the United States under George W. Bush and Obama.

Trump has repeatedly said that the ongoing civil war in Ukraine since the democratically elected government of President Viktor Yanukovych was toppled in a violent 2014 coup was peripheral to US interests. However, that position is anathema to the hawkish top commanders of the US military and neoconservatives and globalists in Congress.

Chief of the Joint Chiefs of Staff General Joseph Dunford and former NATO Supreme Commander and ex-head of US European Command (EUCOM) Air Force General Philip Breedlove have both repeatedly testified to Congress that the United States must protect Ukraine against Russia.

Breedlove has even referred to the government and armed forces of Ukraine under chocolate billionaire President Petro Poroshenko as "our Ukrainian brothers."

Trump has promised to maintain traditional US alliances, but so far he has been vague on where he would draw the line, although during the campaign he described NATO as "obsolete." Trump has also been critical of the lack of financial contributions of the alliance’s members.

It also remains unclear if Trump will commit the United States to support the three Baltic States of Latvia, Lithuania and Estonia.

After a quarter century of continual NATO expansion eastward fully supported by the United States, Russia will demand concrete actions from Trump to rein in the spread of US and NATO military power across Eurasia.

"Trump does not know whom he can trust on foreign policy and who among his growing entourage is on the payroll of expansionist regional leaders like Turkish President [Recep Tayyip] Erdogan," Todd claimed.

OPPOSITION TO TRUMP PICK FOR SECRETARY OF STATE REX TILLERSON

Trump’s selection of Exxon Mobil Chairman and CEO Rex Tillerson as his secretary of state sent a strong signal he will make a priority of improving relations with the Kremlin.

However, Tillerson may face challenges to his confirmation from Republican hawks who want to confront Russia rather than work with her in addition to other not-so-hawkish lawmakers like Senator Bernie Sanders.

"Not only is Mr. Tillerson a pal of Russia's authoritarian leader, Vladimir Putin, but he is the head of one of the largest oil companies in the world," Sanders said in a statement on December 13. "In this appointment, Mr. Trump is making it abundantly clear that the short-term profits of the fossil fuel industry are more important than climate change and the future of the planet. Very sad. Very dangerous. Mr. Tillerson must be opposed."

Tillerson also is used to working with a united top leadership at Exxon Mobil but he may face fierce resistance to his anticipated pro-Russia policies led by Trump’s pick for Secretary of Defense James Mattis backed by the CIA and a consensus of Republican and Democratic lawmakers.

Tillerson has successfully negotiated and implemented energy development agreements with the Russian government, giving him a wealth of experience in dealing with the Kremlin that no US professional diplomat in the current generation can match.

Obama Tries to 'Box in' Trump by Imposing New Sanctions Against Russia
Former Clinton-era Deputy Defense Secretary John Hamre asserted that Tillerson "has had more interactive time with Vladimir Putin than probably any other American, with the exception of Henry Kissinger."

In choosing Tillerson, Trump also deliberately reached out to pick a "vicar" or chief coordinator and guide, to US foreign policy who was not from within the State Department’s own internal culture, which has become increasingly dominated by neoconservative ideology in recent decades.

Lebanese geopolitics specialist Riyad Eid maintained that Tillerson’s nomination meant that Trump did not just want to see a softening of hostile rhetoric between Washington and Moscow, but that he was serious about negotiating a series of cooperative agreements on a wide range of issues.

"By appointing Tillerson, Trump confirms his desire to work closely with Russia in terms of foreign policy, in order to reach a mutual understanding on many difficult issues, including Syria and Ukraine, as well as regarding energy industry in Europe," Eid said.

Tillerson will also have to handle a far broader range of issues than he had been accustomed to, Woodrow Wilson Center senior analyst Shihoko Goto told Sputnik.

"Much has been made about his dealings with Russia and relations with Putin in particular. But they have been through a narrowly defined issue, the energy market where objectives are clear and results tangible," Goto said. "That will not be the case in the world of diplomacy."

Trump looks likely to find willing would-be partners in Moscow for the constructive initiatives he has suggested. But first he and Tillerson will have defeat their many political enemies in Washington.