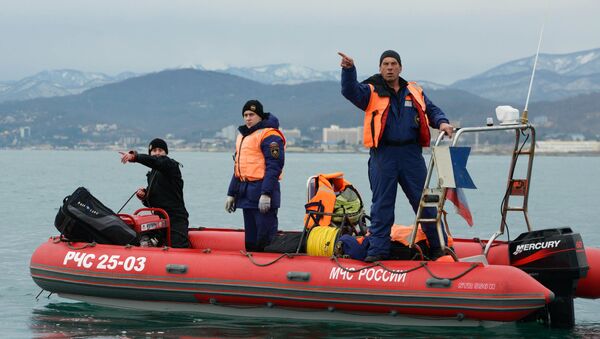 © Press-service of Russian Emergency Situations Ministry
/
Go to the photo bank
Subscribe
According to a source in the security services, rescuers have been unable to find the third Russian Defense Ministry's Tu-154 flight recorder in the Black Sea yet.

Main Phase of Tu-154 Search And Rescue Operation Over
MOSCOW (Sputnik) – Rescuers have been unable to find the third Russian Defense Ministry's Tu-154 flight recorder in the Black Sea yet, a source in the security services told RIA Novosti on Thursday.

"The rescuers have so far not been able to find the third Tu-154 flight data recorder," the source said.

Divers have recovered two black boxes from the seabed and sent them to Moscow for decryption. the Russian Defense Ministry said earlier.

The aircraft heading from Moscow to Syria crashed shortly after refueling and take-off from the Russian southern city of Adler, near Sochi, on Sunday.

A law enforcement source said Thursday the main phase of the search and rescue operation was over after all main fragments and 19 bodies have been recovered from the Black Sea.