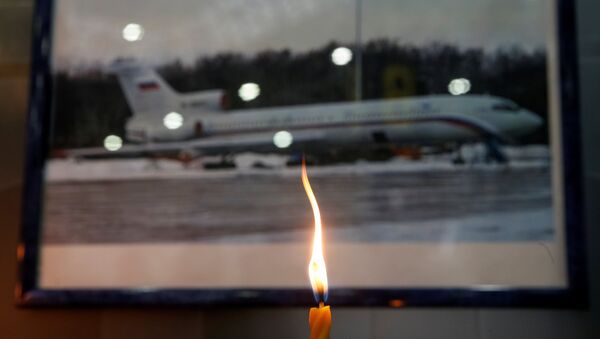 © REUTERS / Maxim Shemetov
Subscribe
The Russian government's investigation committee is holding a press briefing to discuss the progress of the Tu-154 crash probe.

"It has been established that the plane almost completely fell apart after it hit the water surface and the sea shore, which has naturally complicated the search operation," Maxim Sokolov said.

'Commander, We're Going Down': Clues About What Made the Russian Tu-154 Crash
"On December 25, after we received information on the Tu-154 crash, the Russian Defense ministry and the Russian Emergency Ministry rescue teams were immediately delivered at the crash site," Minister of Transport Maxim Sokolov said.

Over 130 square kilometers of seaside have been examinated. Suring the search operation over 2,000 fragments of the plane and 19 bodies and 230 body parts were found. The crash site was completely examinated.

"We've completed the main phase of the search operation, but the rescue operation continues," Sokolov said.

"Today the primary objective is to identify victims. The DNA tests are already underway," he added.

"Final conclusions on this tragedy will be made after all the data will be collected and examinated," Sokolov said at the press conference.

Divers Recover Magnetic Tape From Crashed Tu-154's Missing Flight Data Recorder
In parallell with the technical commission of the Russian Defense Ministry, police and security services officers are working on the investigation.

The transport minister asked journalists to abstain from publishing an information from unconfirmed sources until the investigation is completely over.

"The final conclusions on the causes of the tragedy will be made only after decoding of flight recorders, as well as of the main data storage device and cockpit voice recorder. Despite the fact that today we already have information that got leaked into the press, the final conclusions, of course, should be done after thorough analysis and conducting all necessary examinations," Sokolov told reporters.

Deputy Emergencies Minister Alexander Chupriyanov said that the Russian Emergency situations ministry has necessary experience for conducting such searching operations. We were able to locate the crash site with provided satellite data, he said.

"I’d like to emphasize the role of the National Crisis Management Center. Thanks to space monitoring, the largest fragments were detected on images made from space. The findings were confirmed by our divers," Alexander Chupriyan told reporters.

The transport minister Sokolov said that there some technical malfunction has been involved, but he cannot make any conclusions without official results of the investigation.

"It appears that there was a technical malfunction. What is the cause of it is the issue that experts should examine, a special technical commission has been created for this purpose," Sokolov said.

Preliminary Russian Tu-154 Probe Results Could Be Expected in January

"At this moment, our commission has the flight data recorder and the cockpit voice recorder. Since yesterday, the detailed deciphering and examination of the materials stored on these recorders has been underway. To examine all parameters of the work of engines, aircraft systems, to do the overall analysis of the flight, no fewer than 10 days are required, and we are hoping to present the final conclusions on the causes of the aircraft accident no earlier than in 30 days," he said.

So the preliminary results could be available in January, the transport minister said.

"Preliminary results of the investigation could be obtained in January 2017," Maxim Sokolov told journalists.

Final conclusions about the causes of the Russian Tu-154 crash in the Black Sea would be made only after experts decode the flight data recorders, Russia's Transport Minister Maxim Sokolov said Thursday.

"The final conclusions on the causes of the tragedy will be made only after decoding of flight recorders, as well as of the main data storage device and cockpit voice recorder. Despite the fact that today we already have information that got leaked into the press, the final conclusions, of course, should be done after thorough analysis and conducting all necessary examinations," Sokolov told reporters.

Identification of the Tu-154 crash victims may take up to four weeks, a representative of the Russian Health ministry told journalists.

"Relatives of all victims have already given biological samples required for tests, and we hope to complete them within four weeks," Igor Kagramanyan said.

World Weeps With Russia During National Day of Mourning for Tu-154 Victims
Only one of the 92 victims of last Friday’s plane crash in Black Sea has been identified and interred, the head of the Russian Armed Forces’ Flight Safety Service said.

"One body has been identified and buried, the funeral took place yesterday … We must be patient and wait for the results of the [DNA] expertise," Lt. Gen. Sergei Bainetov told reporters.

Russia's largest retail bank Sberbank has taken a decision to write off the loans and debts of victims of the crash of the Russian Defense Ministry's Tu-154 aircraft over the Black Sea, Russian Transport Minister Maxim Sokolov said.

"Sberbank took the decision to write off the loans and debts of victims, though, relevant applications from close relatives are needed to do this," Sokolov told journalists.

Defense Minister Says Does Everything Possible to Investigate Tu-154 Causes
The crew of the crashed Russian military Tu-154 plane that came down last week was flight-ready and skilled enough for the job, the head of the aviation safety authority with the Russian Defense Ministry said.

"We have assessed that the crew was ready for the flight and had an appropriate skill level to carry out the task. Commander Maj. Roman Volkov had a 4,000-hour flight time, including a 1,500-hour flight time on this type of aircraft," Sergei Bainetov said.

In the beginning we had more than 15 versions of the Tu-154 crash, now there are twice fewer, Lt. Gen. Sergei Bainetov, the Russian Air Force's deputy head of flight safety, said told reporters.

"More than 15 possible reasons were considered at the beginning of the investigation of the aircraft crash. After the black box recorders' extraction, the number of possible reasons had been cut down by half," Lt. Gen. Sergei Bainetov told reporters.

No Explosion on Board Tu-154, Yet Terror Act Not Ruled Out

There was no explosion on board the Russian Tu-154 aircraft that crashed in the Black Sea, though a version of a terror attack is not ruled out yet he added.

"We have have concluded that there was no attack, well at least there was no explosion on the board. Though this version [of a terror attack] is not ruled out," Bainetov said.

Fuel System Failure Might Be Behind Tu-154 Plane Crash
Last flight of the crashed Tu-154 plane went for about 70 seconds, maximum altitude was about 250 meters at speed of 360-370 kmph.

"I can tell you that the conversation [with air controllers] was extremely short. Image, the situation lasted for 10 seconds. What can you say in 10 seconds? … That’s why the analysis of the commander’s comment only indicates when the special situation started, nothing else," Lt. Gen. Sergei Bainetov told reporters.

The crashed Russian Tu-154 aircraft refueled in the city of Adler due to bad weather conditions in Mozdok, and this was planned, Lt. Gen. Sergei Bainetov, the Russian Air Force's head of flight safety, said told journalists.

"Flights to Syria are performed with refueling in one of the airports in the list of the flight's plan, it is usually done at the Mozdok airport. The alternate airports are the airport on the Crimean Peninsula and the Sochi airport. At the time of the aircraft departure the meteorological conditions at the Mozdok airport did not meet the landing conditions, so there was an unscheduled landing [in Sochi], and there is nothing wrong with that," Bainetov said.

Nobody except two members of the Russian Federal Border Security Service entered the Tu-154 plane when it made a stop at Sochi to refuel, the head of the aviation safety authority with the Russian Defense Ministry said.

"All passengers boarded the plane at the Chkalovsky Airport [in Moscow]. Only border guard staff entered the plane in Sochi to perform their border check duties. They were two representatives of the Federal Border Security Service," Sergei Bainetov said.

"The investigation is actually underway, and the results will show us whether it is all true or not," Pankov told reporters, adding that if transcripts were found to be genuine the Ministry would look for those behind the leak.

Michael Calvin
29 December 2016, 13:20 GMT1
000000
Of course not. Obongo and his white owners shouldn´t be let off the hook that easily. This is exactly what they have been threatening with more desperately with every passing day. These are cornered evil beasts with not much to lose. We should be on the alert and expect more of the same, i know the Russians are and their response to all of this will be devastating to every responsible individual.