Major Sports Events Worth Expecting in 2017 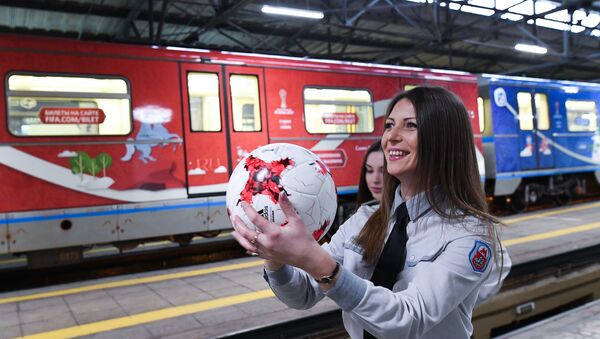 © Sputnik / Alexander Vilf
/
Go to the photo bank
Subscribe
The year of 2017 will be a joy for millions of those who enjoy watching major sports events, with dozens of competitions expected to be aired, such as the 2017 Ice Hockey World Championship, Biathlon World Championships, 2016-2017 UEFA Champions League and others.

Sports Federations Should Avoid Boycotts of Russian Events - Mutko
MOSCOW (Sputnik) – Given the fact that FIFA World Cup 2018 in Moscow is awaited by sports fans most of all, the 2017 FIFA Confederations Cup, which is a prelude to the most important football championship in four years, is expected to attract much attention.

The Confederations Cup will be held in four Russian cities, namely Moscow, St.Petersburg, Kazan and Sochi from June 17 to July 2, 2017.

The tournament will comprise the group stage and the knockout stage and is seen by many as a major rehearsal ahead of the World Cup, which will not only check the physical shape of the footballers, but also the readiness of the stadiums and infrastructure.

There will be eight teams from six confederations participating in the championship, including Russia that qualifies as the host country, Germany as the current world champion, Australia as the 2015 AFC Asian Cup winner, Mexico as the winner of the 2015 CONCACAF, New Zealand as the winner of the 2016 OFC Nations Cup, UEFA Euro 2016 winner Portugal, and the future winner of the Africa Cup of Nations to be determined in February 2017.

Russia will play in the same group with New Zealand, Mexico and Portugal, while the Group B comprises of the future African champion, Chile, Australia and Germany.

Russia is not among the championship’s favorites, following its unsuccessful performance at the 2016 UEFA European Championship, where it finished in the last place in the group. However, given the recent reshuffles and the change of the head coach, the Russian fans are not in despair and still expect some positive "surprises" from their team.

The upcoming sports year will also be marked by the Ice Hockey World Championship in Paris that will be held on May 5-21.

The two main contenders for the first place – Russia and Canada, had been seeded into different groups, according to their world ranking standings.

The preliminary round with 8 teams in 2 different groups will be followed by a play-off stage.

In 2016, the Russian national team in a disappointing game for the Russian fans lost 3-1 to Finland in semi-finals, but beat the US team in the third place match, receiving a bronze medal.

In 2017, millions of Russian fans are expecting a more coordinated game from the team, given the fact that many of its players spend most of their time playing in the NHL league and have little chances to practice together with their Russian teammates.

This multi-race event over a biathlon season will end on March 19, 2017, to define the overall men and women champions.

As at mid-December 2016, the overall men standings are headed by French Martin Fourcade, who won the championship in the previous season. Fourcade is followed by Norway’s Johannes Thingnes Bo and Russia’s Anton Shipulin.

In the overall medal table, France is in the first place with six gold medals, followed by Germany and Norway. Russia is fourth at the moment, thanks to Anton Babikov’s gold in 12.5-km pursuit that he got on December 4.

With many more races to go, the medal count will still see some considerable changes.

The major event to watch for those who prefer individual sports to more brutal, team competitions. In March-April 2017, Finland will host the important event for figure skating lovers.

The defending champions will be: Spain’s Javier Fernandez for men’s singles, Russia’s Evgenia Medvedeva in ladies’ singles, Canadian Meagan Duhamel and Eric Radford in pair skating, as well as Gabriella Papadakis and Giullaume Cizeron from France in ice dancing.

Seventeen-year-old Medvedeva is the world record holder both for the ladies’ short program and free program, and is among the top contenders for the gold medal in 2017.

In June 2017, football fans will be drawn to TVs, while the luckiest ones will watch the UEFA Champions League final at the Millennium Stadium in Cardiff, Wales.

This will be the 62nd season of the European premier clubs championship. In this season, Spanish club Real Madrid will be the defending champion. Real Madrid won the UEFA Champions League eleven times, which is a current record.