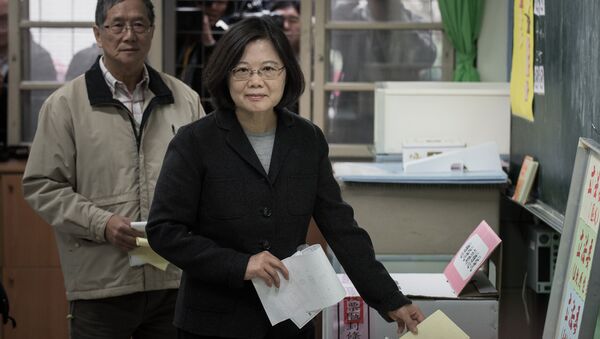 © AFP 2023 / Philippe Lopez
Subscribe
International
India
Africa
Despite protests from China, Taiwan’s Foreign Ministry announced Thursday that President Tsai Ing-wen will stop in the US on her way to a diplomatic trip to Latin America.

The visit will further provoke a China already irritated by a recent telephone call between Tsai and US President-elect Donald Trump, the first such contact between an American and Taiwanese head of state since the administration of President Jimmy Carter.

World
Trump Toys With China Over Taiwan, 'Has Yet to Determine a Red Line'

Since 1979, the US has functioned on the "One China" principle, that holds that Taiwan is a part of China and is therefore incapable of conducting its own diplomatic relations. Beijing still considers Taipei to be a province, and  Chinese officials say that Tsai’s US visit is a transparent attempt to lobby for the country’s full independence.

Increasing tensions between the two countries, a US-deployed research drone was recently intercepted by the Chinese Navy, despite Beijing being made aware that it was US property. Bonnie Glaser, director of the China Power Project at the Centre for Strategic and International Studies, told The Guardian that, "This looks like signalling from the Chinese in response to Trump’s Taiwan call…The Chinese now have much better control over the military, particularly the navy. It is in China’s interest to send signals before Trump is inaugurated, so that he gets the message and be more restrained once he is office."

When news of Tsai’s planned US visit first broke, Beijing said they hoped that Washington would "not allow her transit, and does not send any wrong signals to 'Taiwan independence' forces."

Chinese Foreign Ministry spokeswoman Hua Chunying said at a briefing, "We hope the U.S. can abide by the 'one China' policy…and not let her pass through their border, not give any false signals to Taiwan independence forces, and through concrete actions safeguard overall U.S. China relations and peace and stability in the Taiwan strait."

Tsai’s office announced earlier this month that she would make a diplomatic trip to Nicaragua, Honduras, Guatemala and Ecuador, embarking on January 7 and returning January 15. It has been speculated that Tsai will attempt to meet with Trump ahead of his January 20, 2017, inauguration.

Beijing conducted military drills near Taiwan this week, which some have interpreted as a threat. Defense Ministry spokesman Yang Yujun claimed the activity was routine, but added the Chinese military is prepared to deal with Taiwan, if the necessity arises.

He told reporters, "The military's holding of exercises is beneficial to raising our ability to oppose Taiwan independence and protecting the country's sovereignty and territorial integrity, and beneficial to protecting the peaceful development of cross-Taiwan Strait relations and peace and stability there."

Last Tuesday Chinese Foreign Minister Wang Yi told the People’s Daily, "Going forward, China-US relations will face new complexities and uncertain factors… Only if China and the US respect each and give consideration to other’s core interests and key concerns can there be long-term, stable cooperation."