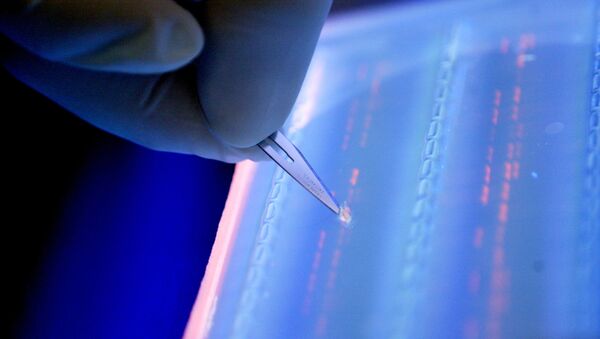 © AP Photo / Wong Maye-E, File
Subscribe
An experimental brain-cancer treatment successfully eliminated tumors in a man’s brain, according to a report in the New England Journal of Medicine. The treatment, which involves injecting cancer-killing cells into the part of the brain that produces spinal fluid, has been called ‘striking’ and ‘remarkable’ by neurosurgeons in early-stage testing.

50-year-old Richard Grady was diagnosed with a brain tumor known as a glioblastoma, or GBM tumor. The American Brain Tumor Association describes GBM tumors as "usually highly malignant," "[growing] rapidly," and "difficult to treat." Rare Disease Report writes that GBM tumors develop rapidly, and that the life expectancy for patients who develop a GBM tumor is 12 months, even with treatment. Grady received the typical treatment of surgery, radiation, and chemotherapy, but it proved ineffective and his cancer returned within six months.

Grady was then enrolled in a clinical trial which experimented with CAR-T cell therapy, a treatment technique in which immune cells known as T-cells are modified in a lab to become "biological assassins" that seek and destroy cancerous cells. CAR-T therapy is usually used to treat bloodborne cancers, but doctors at City of Hope cancer center in Duarte, California, believe it may also be effective against solid tumors.

Initially, CAR-T therapy had limited effectiveness for Grady. His tumors continued to grow and the cancer spread to his spine. But when doctors placed a tube into Grady's brain and injected CAR-T cells into the choroid plexus, the part of the brain that produces cerebrospinal fluid, the results were dramatic. His spinal fluid carried the specialized cells throughout his nervous system, where they attacked and destroyed the cancer. The tumors in his body shrank dramatically after three treatments, disappearing entirely after ten.

Although Grady's cancer has since recurred, City of Hope neurosurgery chief Dr. Benham Badie has been very impressed with Grady's reception to the new therapy. Patients in his position typically live for only a few weeks, so Grady, to have lived for over a year and a half, is impressive. The side effects of the treatment, including headaches, muscle aches, and fatigue, were reported to be manageable. "I believe these recent results show we have a potential breakthrough treatment that may have a remarkable impact on patients with malignant brain tumors," said Badie.

Cancer Research Invaluable, Deaths Predicted to Fall by 15% Over Next 20 Years

Grady is one of nine to be treated at City of Hope with CAR-T cells dripped directly into the brain via a tube. Badie said that seven of the nine subjects responded favorably to the treatment. "The most exciting thing about our study is that it proves a better treatment may be attainable," said study lead Dr. Christine Brown. She called the successes of their experiment against GBM tumors "unheard of."

Co-author Dr. Stephen Forman called the research promising, suggesting that it could be used to treat a variety of cancers."Our CAR-T program here is focused not only on leukemia, lymphoma and myeloma, but also on solid tumors including breast cancer, liver cancer and brain cancer, as a way to try to make effective immunotherapy options for difficult-to-treat cancers," he said.

City of Hope is only one of a handful of cancer centers in the United States studying the use of CAR-T as a treatment against solid tumors.