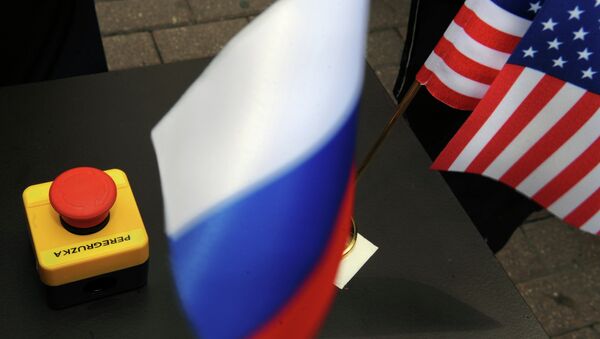 Ex-US Army Officer: Kissinger Backs Trump Plan for Cooperation With Russia
MOSCOW (Sputnik) — Attempts by a number of US congressmen to prevent a new administration’s reset in relations with Russia, including a call to set up a special panel to investigate Russia's alleged interference in the US presidential campaign, may bring about national security threats, former advisor to Donald Trump’s campaign Carter Page wrote in a letter to Senator John McCain, seen by Sputnik.

"Any efforts by members of Congress now to undercut potential new approaches to Russia would risk U.S. national security and innumerable service members lives," Page said in a letter to McCain, who serves as chairman of the Senate Armed Services Committee, sent late on Tuesday.

On December 18, Senate Republican leader McConnell received a letter from a number of US congressmen, including McCain, asking to establish a special panel to conduct a hearing on the alleged Russian role in hacking the Democratic Party emails during the presidential campaign in November.

China In, Russia Out: Trump Readjusting Washington's List of Top Threats
While the decision on a special bipartisan cross-committee panel has not been made yet, Senate Foreign Relations Committee, chaired by Republican Bob Corker, will hold a classified briefing and an open hearing on the alleged Russian interference in January.

"Whatever evidence might eventually be unearthed by Congress and the executive branch in the various ongoing investigations about Russia, it is unlikely that anything will ever be found that is so blatant as the hostile and highly undiplomatic statement by Mrs. Clinton: ‘We came, we saw, he died.’ [her statement reported by US media in October 2011 on the killing of Libyan leader Muammar Gaddafi] President Obama was absolutely correct when he referred to this failed intervention as his worst mistake," Page wrote.

Page’s letter comes amid reports that the United States is close to announcing measures it will take against Russia for its alleged interference in the US election. The White House is determining how to revise a 2015 executive order to allow such actions, but an announcement on the public aspect of Washington's retaliation could come as early as this week, The Washington Post said citing anonymous US officials.

Election of Donald Trump as US president opened new prospects for the future of US-Russian relations, as during the campaign he repeatedly praised the Russian leadership and claimed Washington and Moscow need to work closer together on a number of issues, primarily on the fight against terrorism in Syria.

McCain is currently on a trip to the Baltics with a few other senators to speak with officials about the NATO’s commitment to its allies’ security and about the alleged Russian threat.

AnomicDust
28 December 2016, 16:51 GMT
000000
McCain is currently on a trip to the Baltics with a few other senators to speak with officials about the NATO’s commitment to its allies’ security and about the alleged Russian threat. WE can imagine who he has with him?
anne00marie
28 December 2016, 18:09 GMT
000000
Newsfeed
0
New firstOld first
loader
LIVE
Заголовок открываемого материала
Access to the chat has been blocked for violating the rules . You will be able to participate again through:∞. If you do not agree with the blocking, please use the feedback form
The discussion is closed. You can participate in the discussion within 24 hours after the publication of the article.
To participate in the discussion
log in or register
loader
Chats
Заголовок открываемого материала
Worldwide
InternationalEnglishEnglishMundoEspañolSpanish
Europe
DeutschlandDeutschGermanFranceFrançaisFrenchΕλλάδαΕλληνικάGreekItaliaItalianoItalianČeská republikaČeštinaCzechPolskaPolskiPolishСрбиjаСрпскиSerbianLatvijaLatviešuLatvianLietuvaLietuviųLithuanianMoldovaMoldoveneascăMoldavianБеларусьБеларускiBelarusian
Transcaucasia
ԱրմենիաՀայերենArmenianАҧсныАҧсышәалаAbkhazХуссар ИрыстонИронауОssetianსაქართველოქართულიGeorgianAzərbaycanАzərbaycancaAzerbaijani
Middle East
Sputnik عربيArabicArabicTürkiyeTürkçeTurkishSputnik ایرانPersianPersianSputnik افغانستانDariDari
Central Asia
ҚазақстанҚазақ тіліKazakhКыргызстанКыргызчаKyrgyzOʻzbekistonЎзбекчаUzbekТоҷикистонТоҷикӣTajik
East & Southeast Asia
Việt NamTiếng ViệtVietnamese日本日本語Japanese俄罗斯卫星通讯社中文（简体）Chinese (simplified)俄罗斯卫星通讯社中文（繁体）Chinese (traditional)
South America
BrasilPortuguêsPortuguese
NewsfeedBreaking
07:31 GMTGloves Off: Prince Andrew Takes New Legal Strategy, Aims to Fight Sex Abuse Allegations, Media Says
07:10 GMTMan Arrested on Suspicion of Murder of London Teacher Sabina Nessa
07:06 GMTExplosion in Southwestern Pakistan Kills Four Soldiers, Two Injured, Reports Suggest
06:55 GMTMan Utd's Solskjaer Claims Villa’s Winning Goal Was Clearly Offside
06:39 GMTTen People Missing After Landslide in Southwestern China, Reports Suggest
06:14 GMTJapan May Lift State of Emergency by End of September
05:47 GMTBoris Johnson 'Backing Construction of Fleet of Mini Nuclear Reactors' as UK Gripped by Fuel Crisis
05:43 GMTRussia's Only Active Female Cosmonaut Could Set New Record For Duration of Space Stay
05:29 GMT'Are They Paid Actors?' Ex-UK Health Secretary Mocked for 'Comeback Video' in His Constituency
04:30 GMTGoing Scuba Diving: Adorable Golden Retriever Pup Sleeps in Water Bowl
04:00 GMTNewsom: California to Nix the Word 'Alien' From State Laws on Immigration
03:45 GMTMexican Soldiers Detained by Border Patrol Near Puente Libre - Authorities
03:35 GMTUN Secretary General Holds Talks With Foreign Ministers of Armenia, Azerbaijan
03:25 GMT'Country Has Gone to Hell': Trump Urges US Voters to Back 'America First' GOP Ahead of 2024 Election
03:18 GMTRussia Has ‘Thoughtful Optimism’ on Possibility of Restoring Iran Nuclear Deal - Lavrov
03:01 GMTMcConnell Refuses to Rule Out GOP Blockade of a Biden SCOTUS Nominee
00:38 GMTVideo: Amtrak Cross-Country Train Derails in Montana, Leaves Dozens Injured & At Least 3 Dead
00:00 GMTGerman Voters Going to Polls in Election That Marks End of Merkel's 16 Years as Chancellor
YesterdayVenezuelan Government Delegation Arrives in Mexico For Talks With Opposition - Maduro
YesterdayLavrov Says Borrell Told Russia to Get Out of Africa