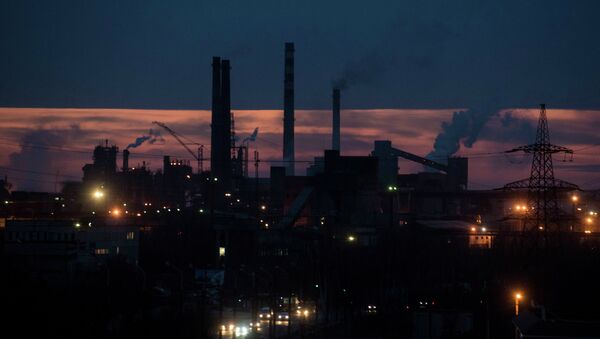 © AP Photo / Evgeniy Maloletka
Subscribe
On January 1, 2016, the EU-Ukraine Deep and Comprehensive Free Trade Agreement went into effect. Unfortunately, the trade deal has failed to help Kiev substantially increase its exports to Europe, or to grow foreign investment in the country's economy; meanwhile, the Eastern European country's trade ties with Russia have been left in tatters.

Ukrainian economists are not surprised by these results. Speaking to RIA Novosti, they explained that Kiev had held completely unrealistic expectations for the trade agreement from the very beginning. Furthermore, they said, Ukraine's exports to Europe consist mostly of raw materials with low added value, and that the price of these continues to slide. Finally, Ukraine's agricultural producers are having an increasingly difficult time competing in Europe's highly subsidized market. European countries have only enhanced these subsidies following the closure of the Russian market to their goods.

Free Trade Area With EU Results in Collapse of Ukrainian Industry – Opposition
According to the experts, for the EU-Ukraine trade deal to do any good, Kiev must improve its business climate and attract foreign investment to help with the modernization of the economy. That, they argue, would allow the country to hold its own by producing more competitive value-added goods for export. However, whether the country's authorities are even capable of fighting corruption remains uncertain.

For Ukrainian producers, the EU-Ukraine FTA effectively stepped into force in the spring of 2014, when Brussels agreed to provide Ukrainian businesses with certain trade preferences on European markets. But it was the comprehensive deal which went into effect in 2016 which finally granted European companies free access to the Ukrainian market.

The EU-Ukraine deal was accompanied by an effective collapse in trade and economic relations between Ukraine and Russia, with whom Kiev had maintained strong economic ties for over two decades following the collapse of the Soviet Union. Soon after the Maidan coup d'état in early 2014, when Kiev penned the agreement with the EU, Moscow was forced to freeze its own comprehensive trade agreement with Ukraine, and eventually to limit the free transit of Ukrainian goods through Russian territory to other Commonwealth of Independent States countries.

Paradoxically, experts noted, these statistics remain far below the figures from before the EU-Ukraine FTA stepped into effect. Between January and September 2013, the last full year before the country's political crisis began, Ukraine's exports to the EU amounted to $11.9 billion, and imports stood at a whopping $19.3 billion. At the time, the European Union accounted for 26.5% of Ukraine's total exports, and contributed 35.1% of its total imports. 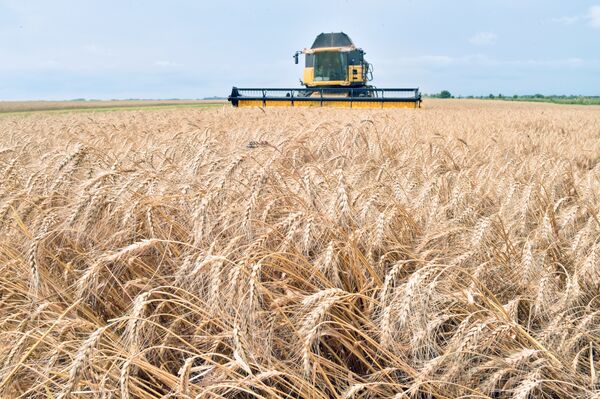 Biden Calls Poroshenko, Commends Nationalization of PrivatBank
Accordingly, Ukraine faces a desperate situation where its dependence on the EU has grown, economic diversification via trade with Russia has declined, and total trade has also fallen, together with the rest of the economy.

Ukrainian economist Andrei Blinov told RIA Novosti that "during the euphoria that followed the Maidan, many proponents of European integration were saying that our exports to Europe would increase several fold thanks to the FTA, and that this would fully cover the loss of the Russian and CIS markets." Basically, these proved to be completely unfounded declarations, the economist noted.

Researcher Oleg Ustenko, who works as the director of the Blazer International Fund, an independent NGO which specializes in studies of the Ukrainian economy, echoed his colleague. Ukrainian authorities, he said, were looking at the EU-Ukraine FTA through 'rose-colored glasses'.

"If we look at the structure of our exports to the EU, we can see that in large part these are products with a low added value. Mainly, we sell raw materials," Ustenko explained. The researcher stressed that Ukraine's high-tech, high value-added products, like metallurgy, aerospace engineering, and machine building are not competitive in Europe, nor are they welcome there.

The Tragic Fate of Ukraine's Antonov, Once a Legendary Name in Aeronautics
Somewhat unexpectedly, Ukrainian agricultural producers have also been hit hard, not just due to the loss of the Russian market, but thanks to the EU-Russia sanctions war that broke out in 2014.

Blinov noted that after losing the Russian market, European producers lost out on billions in revenue, their output remaining in Europe, and producers unable to quickly reorient to other markets.  Accordingly, he said, "we have seen that in this situation, Europe strengthened protectionism…thus limiting the access of goods from other markets, including Ukraine."

As if things weren't bad enough, global prices for raw materials have been falling, Blinov said. "Over the past years, prices on world commodity markets have dropped by approximately half compared with the period before mid-2015, and Ukraine, as a key exporter of raw materials and semi-finished goods, has of course been very much affected by this, as have all commodity-producing countries."

Meanwhile, Brussels' promises to expand quotas for duty-free imports of Ukrainian agricultural goods also haven't turned out as expected, with producers complaining that many of the quotas remain miserly low, and are filled in a few months' time, while Brussels refuses to ease quotas on other goods due to a lack of expensive licenses. Quotas have increased Ukrainian food exports to EU markets by just $300 million between 2015-2016, from $2.6 billion to $2.9 billion total.

According to Ukrainian agribusiness analyst Dariya Gritsenko, the main obstacle for a more substantial growth of exports is certification, with Ukrainian producers unable to obtain costly European quality and safety certificates for high value-added goods like meat and dairy products. Another, broader problem, she said, is that even where quotas are not an issue, Ukrainian manufacturers are having a difficult time finding buyers.

Budgetman: Ukraine's Fictional Hero Created to Approve (Presumably) Real Budget
Economists also pointed out that the EU-Ukraine FTA's promises of improving ordinary Ukrainians' lives through cheap, quality European consumer goods have also failed to materialize, thanks to a dramatic depreciation of the country's currency in the last two years. "We have not come to see cheaper European goods, because imports' prices are based on the euro; due to the serious devaluation of the hryvnia, prices have only gone up," Oleg Ustenko explained.

Finally, analysts said that the expected spike in foreign investment into the Ukrainian economy after the introduction of the free trade agreement has also failed to take place. According to state statistics, in the first nine months of 2016, foreign investment grew by $2.6 billion compared with the same period in 2015, to a total of $45.2 billion.  Most of this investment came from Cyprus, however. Accordingly, experts suggest that most of this figure was actually the capital of Ukrainian oligarchs who use Cyprus and other EU member countries as offshore safe havens for their wealth, occasionally injecting portions into lucrative sectors of the economy.

Effectively, observers say, nearly all the benefits of an EU-Ukraine trade agreement promised by Kiev and Brussels officials have failed to materialize. Meanwhile, Ukraine's traditional economic links with Russia have been left in tatters. With the country now left to cope with its humiliating newfound status as a raw materials appendage, Kiev has been left in the unenviable position of having to answer for its failed promises of a EU-sponsored Ukrainian economic miracle.

000000
Popular comments
Infidel Cartman, How did Russia create Ukraine corruption? 1917, the Bolsheviks overthrew the Russian Empire. When Lenin died, the Georgian Stalin replaced him and launched the Communist Soviet Union. It fell in 1991, 15 independent nations emerged. Only, the ones with brains, embraced their independence and the professional victims and beggars rant straight to Soviet Europe, ironically run on the same ideology as the old Soviet Union. 25 years later, and they still blame Russia, a nation which was also overthrown, in the quest to get the Soviet Union up and running.
anne00marie
28 December 2016, 15:33 GMT3
000000
Never mind, at least they got the $5 billion in cookies. Russia offered a $15 billion, interest free loan and cheap gas, to help them out, but Kiev chose the cookies and EU sweet-talk.
anne00marie
28 December 2016, 15:31 GMT1
000000
Newsfeed
0
New firstOld first
loader
LIVE
Заголовок открываемого материала
Access to the chat has been blocked for violating the rules . You will be able to participate again through:∞. If you do not agree with the blocking, please use the feedback form
The discussion is closed. You can participate in the discussion within 24 hours after the publication of the article.
To participate in the discussion
log in or register
loader
Chats
Заголовок открываемого материала
Worldwide
InternationalEnglishEnglishMundoEspañolSpanish
Europe
DeutschlandDeutschGermanFranceFrançaisFrenchΕλλάδαΕλληνικάGreekItaliaItalianoItalianČeská republikaČeštinaCzechPolskaPolskiPolishСрбиjаСрпскиSerbianLatvijaLatviešuLatvianLietuvaLietuviųLithuanianMoldovaMoldoveneascăMoldavianБеларусьБеларускiBelarusian
Transcaucasia
ԱրմենիաՀայերենArmenianАҧсныАҧсышәалаAbkhazХуссар ИрыстонИронауОssetianსაქართველოქართულიGeorgianAzərbaycanАzərbaycancaAzerbaijani
Middle East
Sputnik عربيArabicArabicTürkiyeTürkçeTurkishSputnik ایرانPersianPersianSputnik افغانستانDariDari
Central Asia
ҚазақстанҚазақ тіліKazakhКыргызстанКыргызчаKyrgyzOʻzbekistonЎзбекчаUzbekТоҷикистонТоҷикӣTajik
East & Southeast Asia
Việt NamTiếng ViệtVietnamese日本日本語Japanese俄罗斯卫星通讯社中文（简体）Chinese (simplified)俄罗斯卫星通讯社中文（繁体）Chinese (traditional)
South America
BrasilPortuguêsPortuguese
NewsfeedBreaking
14:28 GMTReverse Psychology: Fake Funeral Home in US Promoted Vaccine Shots
14:27 GMTGerman Government Says Unaware Who Sponsored Navalny's Accommodation in Germany
14:26 GMTMan Accused of Plotting to ‘Topple UK Government’ to Stop ‘Communist System’ Faces Trial in 2022
14:26 GMTUK Recognises Covishield, Falls Short of Validating India's Vaccine Certificates
14:02 GMTUK Foreign Secretary Hopes Russia, China Will ‘Act as One’ in Engaging With Taliban
14:01 GMTUS Assures EU of Solidarity in Seeking 'Solid' Gas Supply in Winter
13:34 GMTXi Jinping Vows China Will Never ‘Invade or Bully’ States, Calls to Reject ‘Zero-Sum Games’
13:08 GMTNuclear Power, Food and Other Industries Affected by UK CO2 Shortage, Which is Spilling into Europe
13:08 GMTZelenskyy's Aide Shefir Says Assassination Attempt on Him Aimed at Intimidating Government
12:58 GMTMerkel, Kramp-Karrenbauer Pay Tribute to German Soldiers Who Participated in Afghanistan Evacuation
12:48 GMTPakistan to Keep Sending Aid to Afghanistan, Focus on Humanitarian Mission, Ambassador Says
12:45 GMTGerman Energy Ministry Believes Russia Fulfilling Gas Supplies Obligations
12:25 GMTOne Cable to Rule Them All: EU to Demand Use of Common Charger for Smartphones by 2024
12:19 GMTEcoHealth Alliance, DARPA Toyed With Infecting Wild Chinese Bats With Covid, Leaked Docs Allege
12:17 GMTCristiano Ronaldo's Return to Manchester United Makes Him World's Highest-Paid Footballer
12:11 GMTUS House Passes Bill Compensating 'Victims' of Enigmatic 'Havana Syndrome'
12:07 GMTMacron, Biden to Hold Talks on Wednesday to Clarify Details of Australia's Decision on Submarines
11:57 GMTSudanese Authorities Lack Mandate to Sign Naval Base Agreement With Russia, Minister Says
11:44 GMTCanada Unlikely to See Another Snap Vote After Trudeau's Failed Bid to Win Majority
11:26 GMTBiblical Story of Sodom Likely Inspired by 'Cosmic Airburst' Bigger Than Tunguska Blast, Study Says