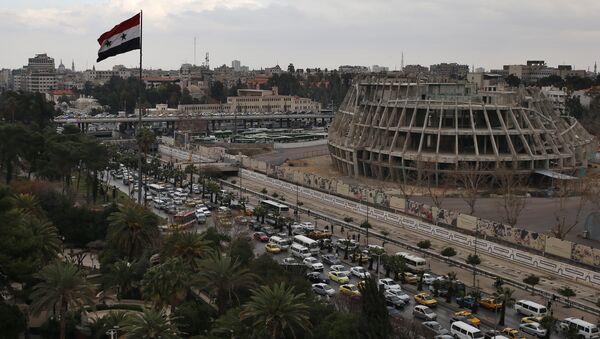 © AP Photo / Hassan Ammar
Subscribe
International
India
Africa
Turkey and Russia have agreed on the outlines of a nationwide ceasefire plan in Syria and will submit it to Damascus to consider. Commenting upon the initiative, Turkish political scientist Salih Yılmaz explained to Sputnik why the initiative seems to be quite workable and why even the US won't be able to hamper its implementation.

The framework agreement between Russia and Turkey on Syria proposes the end of hostilities in the country starting at midnight local time on December 29.

Turkey, Russia Agree to Submit Syria Ceasefire Proposal to Damascus for Review
The general ceasefire proposal is planned to be presented to the Syrian government for consideration, Turkey's Anadolu news service reported on Wednesday.

Should the pact hold, according to Anadolu, the Syrian government and opposition will launch peace talks in the Kazakh capital of Astana brokered by Russia and Turkey. The bilateral proposal reportedly aims to advance the political process outlined in the UN resolution on Syria.

Commenting on the proposed initiative, Turkish political scientist, Prof. Dr. Salih Yılmaz from Yıldırım Beyazıt University, Faculty of Humanities and Social Sciences spoke to Sputnik Turkiye about why this initiative might just work.

"During the recent meeting in Moscow, attended by the foreign ministers from Russia, Turkey and Iran, it was agreed upon the advance of a nationwide ceasefire plan throughout all of the Syrian territory," he told Sputnik.

"We are also witnessing the rapprochement between Russia and Turkey over the fight against terrorism," he said.

Dr. Yılmaz further explained that the active cooperation between the two countries has resulted in the heavy losses currently experienced by Daesh and other terrorist groups which are operating in Syria.

He noted however that some of the joint initiatives of Moscow and Ankara are being sabotaged by Washington. Nevertheless, operational intelligence sharing between Russia and Turkey is bringing to naught all the subversive operations undertaken by the US.

'Amid US Failure in the Middle East, Russian-Iranian Alliance Gains Momentum'
"Russia, Turkey and Syria are pursuing one common goal and that is the reconciliation of all the parties in Syria and security administration of the nationwide ceasefire plan based on the territorial integrity of the Arab Republic," Dr. Yılmaz said.

He further explained that if peace in Syria is set up on the basis of the territorial integrity of the country, the western countries won't be able to interfere into the processes within the Arab Republic.

Thus, he said, the aim to advance the nationwide ceasefire plan throughout Syria in accordance with the principles agreed upon between the foreign ministers of Russia, Turkey and Iran is quite feasible. Moreover the joint work is ongoing on a number of other issues, which gives hope that developments can be quickly implemented.

In the middle of January, he said, the Kazakh capital of Astana is set to host peace talks between the Syrian government and opposition, brokered by Russia, Iran and Turkey, who, according to the joint statement voiced after the meeting in Moscow on December 20, remain the guarantors of the future peace deal.

With the participation of these three countries, which between them are the only ones able to actually influence the situation in Syria, there is no further need for the services of the US or any other western countries, he therefore concluded.