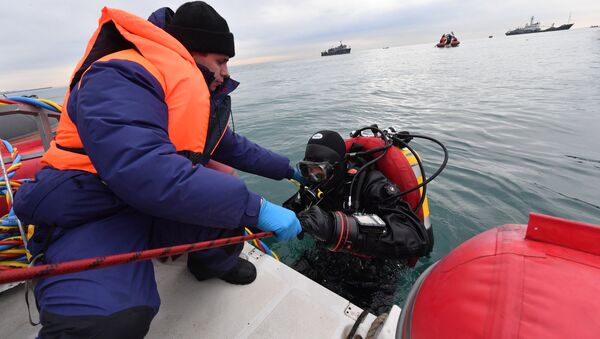 "The second Tu-154 flight data recorder was found and raised from the bottom less than half an hour ago," the ministry said in a statement.

It added that 12 large plane fragments and 1,547 small fragments have been found since the start of the search and rescue operation.

Rescuers have recovered a total of 15 bodies at the crash site of the Russian military plane in the Black Sea, the Russian Defense Ministry said.

"Currently, 15 bodies and 239 body parts have been recovered from water," the ministry said in a statement.

Thirteen bodies and 168 body parts have been sent to Moscow for genetic identification, it added. Samples have been collected from 105 relatives of the victims for examination.

'Commander, We're Going Down': Clues About What Made the Russian Tu-154 Crash
Earlier it was reported that rescuers have found and lifted 311 more pieces of plane wreckage from the bottom of the Black Sea near the Tu-154 crash site in the past 24 hours.

"A total of 1,547 pieces of Tu-154 wreckage has been found and raised to the surface, including 311 founded in the past 24 hours," a source in the security services told RIA Novosti on Wednesday.