'Commander, We're Going Down': Clues About What Made the Russian Tu-154 Crash 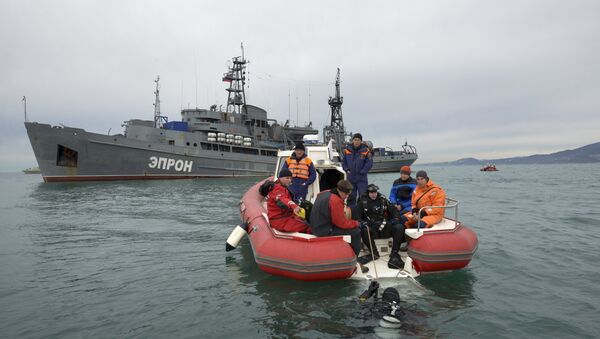 © AP Photo / Viktor Klyushin
Subscribe
A possible flap failure could have caused the Tu-154 Russian military plane to crash in the Black Sea, claiming the lives of more than 90 people on December 25, media reports said.

World Weeps With Russia During National Day of Mourning for Tu-154 Victims
Sunday's Tu-154 plane crash in the Black Sea could have been caused by a problem with the wing flaps, according to media reports.

The Tu-154 Russian Defense Ministry aircraft en route to Syria from Moscow crashed soon after takeoff near Russia's Black Sea resort of Sochi, killing all 92 people on board.

The Russian Defense Ministry said in a statement on Tuesday that a preliminary analysis of the data obtained from a flight recorder recovered from the wreckage of the Tu-154 has allowed the experts to narrow down the possible causes of the incident. 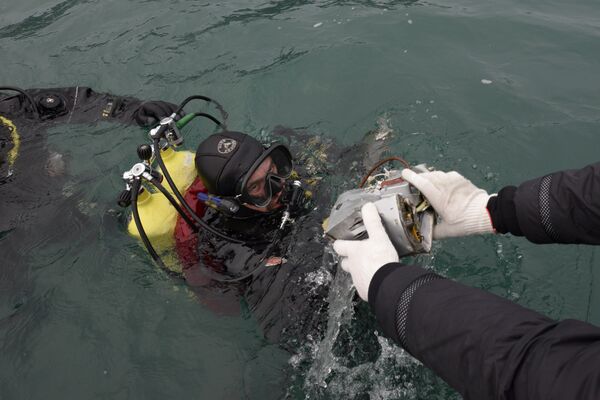 According to the statement, experts from the Air Force Central Research Institute continue to decode data from the main flight recorder, which was recovered from the crash site on Monday and delivered to Moscow.

The Russian news network Life.ru quoted a source close to the investigation as saying that the final words uttered by the Tu-154's pilot indicated a possible flap fault.

Life.ru referred to the final recording of the cockpit before the crash, in which the pilot can allegedly be heard yelling "the flaps, damn it!" which was followed by "commander, we're going down." This has yet to be officially confirmed.

Life.ru also quoted Russian aviation expert Viktor Zabolotsky as saying that flaps-related problems typically lead to a situation where pilots finally prove to be unable to take control of a plane while in the air.

Former USSR Unites in Mourning Tu-154 Crash Victims, With One Exception
He was echoed by another Russian aviation expert, Oleg Smirnov who told the online newspaper Vzglyad that his first assumptions regarding the Tu-154 crash were also related to a flap failure.

The matter is that the plane disappeared just at the point during the flight when the wing flaps should have been retracted, according to Smirnov.

"Flaps are released from under the wing, increasing its area, while changing the curvature of the flow. This is done to increase lifting strength and reduce the speed. Flaps are released before take-off and landing in order to produce a lower speed," he said.

Smirnov recalled that a whole array of plane crashes throughout the world were caused by the out-of-step operation of the wing flaps and that a Tu-154 plane is equipped with a device which automatically switches off the flaps in the event of a relevant problem.

#Zakharova on TU-154 crash: “Condolences to all. Irreparable loss, for they were indispensable.” #Sochi #Russia #crash #TU154 pic.twitter.com/1VhWGk13m4

In this vein, Vzglyad quoted a source familiar with the situation as saying that either a technical glitch or a pilot error could be behind the Tu-154 crash.

The source did not rule out that the crew could have turned a blind eye to releasing the wing flaps ahead of the lift-off.

Smirnov, for his part, described the Tu-154 as a peculiar plane in terms of aerodynamics, recalling that the aircraft has all its three engines, each of which weighs more than a ton, in the tail, something that alters the impact of aerodynamic forces.

"Each Tu-154 aircraft has its own specific features, which should always be kept in mind. In particular, when you remove the flaps, it is necessary to act very cautiously," Smirnov said.

Meanwhile, Nikolay Antoshkin, former deputy chief of the Russian Air Forces, has said that a fuel system failure could have caused the Tu-154 to crash in the Black Sea.

"I think that if the engine fails, one should examine the fuel system. A rupture of a duct, a ducting or a flow divider valve could have occurred – one should look for a problem there," Antoshkin told RIA Novosti.

Ukrainian Officials' Cruel Words About Tu-154 'Sign That Kiev Has Lost Its Mind'
"I do not think that the crash was caused by a foreign object penetrating the engine. The jet could not have been filled with low-quality fuel; the pilots were experienced and there was no sabotage," Antoshkin said.

He added that the time necessary to decode the plane's flight data recorder would depend on the damage the black box suffered.

000000
Popular comments
Slight correction, Flaps are to increase lift during take-off and landing. Flaps are not meant to lower speed. There are other devices to lower speed, speed brakes, spoilers, etc. The purpose of a flap is to alter the camber of the wing so that more lift is generated. There could be a possibility of one flap up and one flap down causing aircraft to roll over and lost control especially with large aircraft.
copius
28 December 2016, 10:48 GMT1
000000
Single point of failure is unlikely if flaps are safety critical. I would look into electro magnetic disturbance...
Mihailovo dete
28 December 2016, 11:10 GMT
000000
Newsfeed
0
New firstOld first
loader
LIVE
Заголовок открываемого материала
Access to the chat has been blocked for violating the rules . You will be able to participate again through:∞. If you do not agree with the blocking, please use the feedback form
The discussion is closed. You can participate in the discussion within 24 hours after the publication of the article.
To participate in the discussion
log in or register
loader
Chats
Заголовок открываемого материала
Worldwide
InternationalEnglishEnglishMundoEspañolSpanish
Europe
DeutschlandDeutschGermanFranceFrançaisFrenchΕλλάδαΕλληνικάGreekItaliaItalianoItalianČeská republikaČeštinaCzechPolskaPolskiPolishСрбиjаСрпскиSerbianLatvijaLatviešuLatvianLietuvaLietuviųLithuanianMoldovaMoldoveneascăMoldavianБеларусьБеларускiBelarusian
Transcaucasia
ԱրմենիաՀայերենArmenianАҧсныАҧсышәалаAbkhazХуссар ИрыстонИронауОssetianსაქართველოქართულიGeorgianAzərbaycanАzərbaycancaAzerbaijani
Middle East
Sputnik عربيArabicArabicTürkiyeTürkçeTurkishSputnik ایرانPersianPersianSputnik افغانستانDariDari
Central Asia
ҚазақстанҚазақ тіліKazakhКыргызстанКыргызчаKyrgyzOʻzbekistonЎзбекчаUzbekТоҷикистонТоҷикӣTajik
East & Southeast Asia
Việt NamTiếng ViệtVietnamese日本日本語Japanese中国中文Chinese
South America
BrasilPortuguêsPortuguese
NewsfeedBreaking
00:04 GMTMagnitude 6.0 Earthquake Rocks Indonesia - EMSC
YesterdayPentagon Chief Says US Ready to Support Taiwan in Face of China’s Military Rise
YesterdayAmericans' Confidence in US Military Continues Its Decline, Survey Shows
YesterdayCNN Fires Chris Cuomo Over His Efforts to Help Brother With Sexual Harassment Claims
YesterdayUS Democracy in Trouble? Half of Young Americans Polled Agree
YesterdaySuper-Union Leader Explains Donation Cut-Off to Cash-Strapped Labour Party
YesterdayFlight From Tel Aviv to Moscow Changed Flight Level Due to NATO Spy Plane - Air Authority
YesterdayPolice: Parents of Suspected Michigan School Shooter Had Help Hiding in Detroit Warehouse
YesterdayKiev Seizure, Donbas Advance: German Tabloid Sources Fantasize Russian Invasion of Ukraine
YesterdayTurkish Authorities Uncover Explosive Device on Police Car Assigned to Erdogan Rally
YesterdayBlast Heard Over Iran's Natanz, Where Nuclear Facility Located
YesterdaySouth African Province at Centre of Omicron COVID Variant Sees More Children in Hospital
YesterdayPolish Prime Minister Orders Cybesecurity Alert Ahead of UN Forum
YesterdayGreek Prime Minister Assures Vatican That Condition of Migrants in Greece Improved
YesterdayUS Warns of ‘Terrible Consequences’ of Possible Chinese Invasion of Taiwan
Yesterday‘Killer Robots’ Threat Persists as US Unwilling to Discuss Ban on Lethal Autonomous Weapons Systems
YesterdayLionel Messi Reveals He 'Never' Wanted to Become Best Football Player
YesterdayPutin, Biden Will Hold a Video Call on Tuesday Evening
YesterdayGiant Christmas Tree Set Up Near Church of the Nativity in Bethlehem
YesterdayParty Like It's 1939: German Chancellor's Send-Off Compared to Nazi Rally