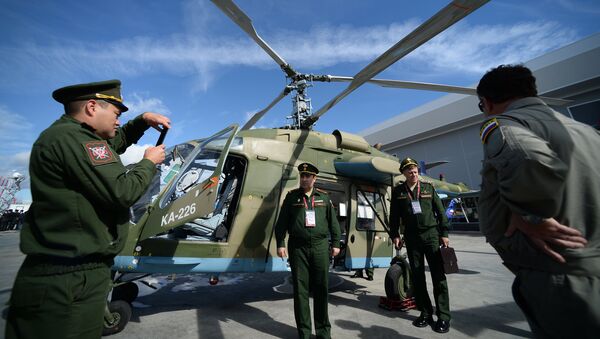 © Sputnik / Maxim Blinov
/
Go to the mediabank
Subscribe
International
India
Africa
CEO of the Russian helicopters holding said that Russia’s Kumertau Aviation Production Enterprise produced the first Ka-226T ship-based helicopter that may be in demand both in Russia and abroad, Alexander Mikheev.

"This year the enterprise produced the first Ka-226T light ship-based helicopter … We expect high demand of Russian and foreign customers on this helicopter for equipping coast guard and other security agencies. According to our assessment, this helicopter has a great potential," Mikheev said, as quoted by the holding’s press service.

He added that the Kumertau Aviation Production Enterprise successfully completed the contract on modernization of Ka-27 helicopters as well as repaired a number of Ka-29 helicopters.

The Ka-226T helicopter is designed for fulfilling transportation and special tasks under any weather conditions. The helicopter can carry up to 1.5 metric tons (about 1.7 US tons) of cargo with a transport range of 600 kilometers (around 375 miles).