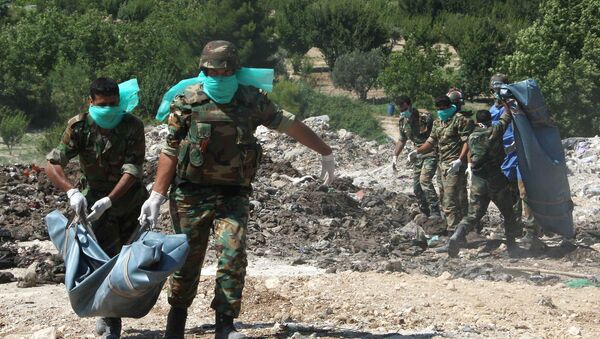 © AFP 2021 / LOUAI BESHARA
Subscribe
The information the Russian military is making public about Aleppo should change the attitudes of Washington and its European allies, military expert Andrey Koshkin told Sputnik.

Aleppo's Liberation is a 'Major Breakthrough' Offering Hope for Peace in Syria
In an interview with Sputnik, military expert Andrey Koshkin suggested that the information on Aleppo which was disclosed by the Russian military may change attitudes toward the so-called moderate Syrian opposition in Washington and among its European allies.

"Mass burial sites of many dozens [of Syrians] have been found; they had been subjected to brutal torture and [then] murdered. In many cases, body parts are missing; most victims had been shot in the head. And this, it seems, is only the beginning," according to Konashenkov. 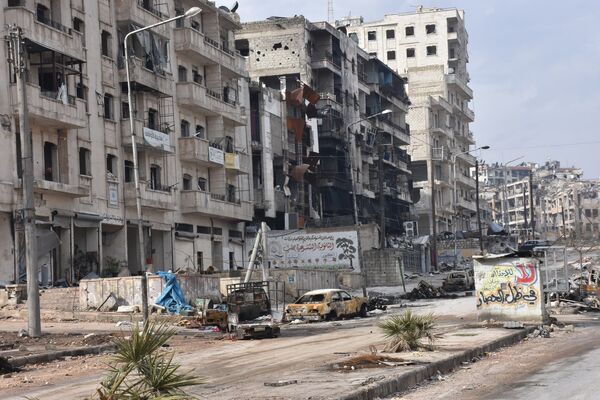 Aleppo 🇸🇾❤️ Syrian soldiers & civilians of all religions celebrating the liberation of their city after 4 years in the Christmas spirit. pic.twitter.com/CQJikb2tzh

Konashenkov further revealed that militants from the "moderate opposition" in eastern Aleppo had booby-trapped nearly everything with explosives before leaving the city, including toys, streets, entrances to premises, cars and motorcycles.

Thousands of people in #Aleppo are celebrating its liberation and are preparing for Christmas. Yet, Western media makes no mention of that.

Commenting on this, Andrey Koshkin said that the US and European countries should review their stance on the moderate Syrian opposition after the publication by Russia of information related to Aleppo.

"After the liberation of Aleppo from militants, unbiased information on the matter has witnessed demand, even in the West," Koshkin said.

He cited the current efforts of "many journalists" to disclose the details of the making of fake videos and information. These were targeted at justifying the actions of Syria's moderate opposition and terrorist organizations, as well as discredit Russia's activity in Syria.

"It was an information and political trap, with both Geneva and the information space repeatedly generating the idea of a 'moderate opposition'. Actually, it was a line aimed at supporting militants," he added.

Syrian government forces have been fighting multiple opposition and terrorist groups, including Daesh and Jabhat Fatah al Sham, formerly known as Jabhat al-Nusra, or Nusra Front. The Syrian civil war has been ongoing since 2011.

000000
Popular comments
We shouldn´t hold our breaths for that. The state and corporate controlled western MSM will make sure it doesn´t reach the public and it is Russia, not the western supported foreign cutthroat mercenaries in Syria that "should stand trial for crimes against humanity" remember?

Mikhas
27 December 2016, 13:09 GMT2
000000
That's what the US gets for supporting the moderates with training and munitions. Now what are they going to do. The US have voiced their support for the moderates throughout the world. The US is just as guilty. I don't see the FAKE NEWS MAIN STEEAM MEDIA TALKING ABOUT THIS TOPIC ? That's because these main stream fake news snakes are part of the corruption.