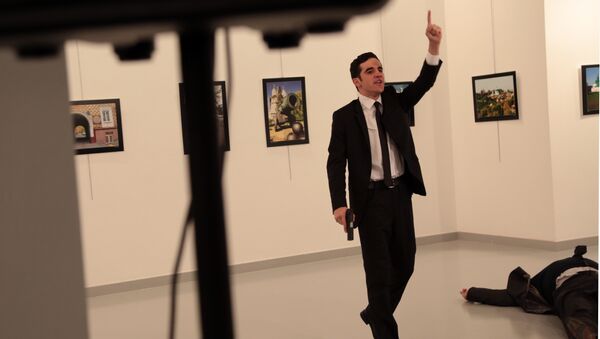 Turkish off-duty police officer Mevlut Mert Altintas, who killed Russian ambassador to Turkey, was not accepted to become the president’s bodyguard, despite he passed an exam to join the presidential security guards.

"[Mert and S.] took an exam to guard the president in Ankara and they won. But they had been police officers for less than one year, so they were not accepted. But I’m thinking about this now. Fortunately, they weren’t able to become the president’s bodyguards," Seher O. said, as quoted by the Hurriyet Daily News.

Murdered Russian Ambassador to Turkey Karlov Buried in Moscow
She added that her brother was influenced by his fellow student from the police school, identified only by the initial of S., with whom he rented a house in Ankara. Altintas might have been "brainwashed" and kept away from their family, Seher O. added.

"We never forced him to read the Quran or perform prayers. We are not that kind of family … He was brainwashed and kept away from us. Some people are saying that we raised him that way, but we did not. He didn’t wear a suit and he does not know Arabic," she said, as quoted by the Hurriyet Daily News.

On December 19, Russian Ambassador to Turkey Andrey Karlov was shot  by Altintas at an art gallery exhibition opening. Three more people were also injured in the shooting. The Russian Foreign Ministry said it considered the attack a terrorist act.