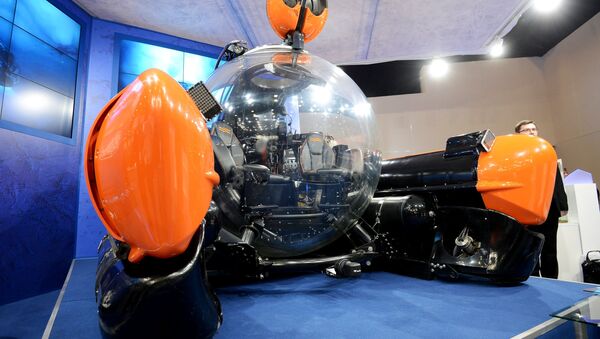 © Sputnik / Sergey Mamontov
/
Go to the mediabank
Subscribe
International
India
Africa
Two devices, C-Quester and C-Explorer submersibles of the Russian Geographical Society (RGS) arrived in the Sochi airport in order to take part in the search operation of the bodies of the victims and debris of the crashed Tu-154 plane, according to the press secretary of the RGS Underwater Research Centre, Marina Davydova.

Russia
Russian Aviation Authority to Make Decision on Future Use of Tu-154 Aircraft
MOSCOW (Sputnik) — C-Quester and C-Explorer submersibles of the Russian Geographical Society (RGS) arrived in Sochi on Monday to search for the bodies of the victims and debris of the crashed Tu-154 plane, the press secretary of the RGS Underwater Research Centre, Marina Davydova, said.

"Two devices are in the Sochi airport, the unloading is in the process, after that they will at once head to the area of the search operation. They will start operating today," Davydova told RIA Novosti.

The apparatuses are capable of working underwater for up to eight hours on the depth of 328-984 feet. They will be operated by the specialists of the RGS Underwater Research Centre. Experienced RGS divers will also work with the submersibles.

Russia
Russia Will 'Spare No Effort or Resources' in Finding Out Cause of Tu-154 Crash
The Russian Defense Ministry’s Tu-154 plane heading to Syria crashed near Sochi early Sunday. The plane was carrying 92 people including eight crew members, 64 musicians of the Alexandrov Ensemble, nine reporters, head of Spravedlivaya Pomoshch (Fair Aid) charity Elizaveta Glinka, and two federal civil servants. All the passengers and crew members are feared dead.

Among the main causes for the plane crash technical malfunction or pilot error have been suggested earlier.

According to the Russian Defense Ministry, 11 bodies have been recovered so far.