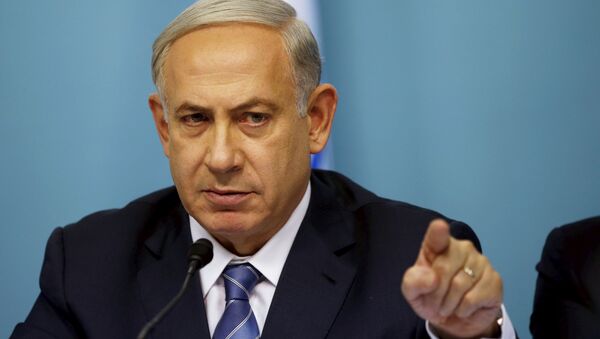 © REUTERS / Ronen Zvulun/File Photo
Subscribe
International
India
Africa
Israel’s response to the UN Security Council resolution condemning its settlement-building policy in the West Bank demonstrates that Israel will not “turn the other cheek” and at the same time it will not harm its relations with other countries as they only respect strong nations, Israeli Prime Minister Benjamin Netanyahu said.

Netanyahu Summons US Envoy After UNSC Vote on Israeli Settlements Resolution
TEL AVIV (Sputnik) — In response to the adoption of the resolution, Netanyahu ordered the state’s Foreign Ministry to review the UN-Israel relationship, including the issues related to Israeli contributions to UN budget and the presence of the organization’s representatives in the Jewish state. He also summoned on Sunday 14 ambassadors of the UN Security Council (UNSC) member states, including Russia, following their vote on a resolution.

“This is a wise, deliberate and vigorous reaction, a natural response of a healthy nation, which makes it clear to the nations of the world that what took place at the United Nations is not acceptable to us … Israel is the country with national pride, and we will not turn the other cheek,” Netanyahu said on Monday.

According to the prime minister, a tough response will change the way Israel is treated by other countries.

“There is no political wisdom to curry favor. Our relations with other countries will not only be unaffected but shall improve over time since other countries respect strong states that are ready to stand up for themselves, and they do not respect weak nations that curry favor and bow their heads,” the prime minister stressed.

Over 500,000 Israeli settlers are estimated to be living in East Jerusalem and the West Bank, which Israel captured during the 1967 war. The settlements are considered illegal by the United Nations.