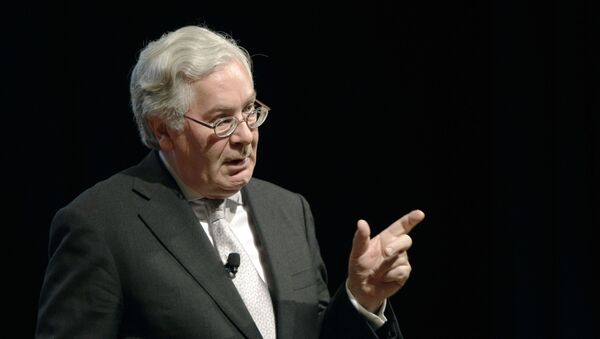 © AP Photo / Kathy Willens
Subscribe
Mervyn King, a former governor of the Bank of England, stated that Brexit presented a number of opportunities, including a chance to rework the system of agriculture subsidies, to revise the relationship with the Republic of Ireland with regard to Northern Ireland.

UK Prime Minister Calls for Unity, New Role for Country After Brexit – Reports
MOSCOW (Sputnik) — The EU Single Market or Customs Union membership upon exit from the European Union may turn out to prevent the United Kingdom from making separate trade agreements, Mervyn King, a former governor of the Bank of England, said Monday.

"I don't think it makes sense for us to pretend that we should remain in the Single Market and I think there are real question marks about whether it makes sense to stay in the Customs Union. Clearly, if we do that, we cannot make our own trade deals with other countries," King said in an interview with the BBC Radio.

King said that Brexit presented a number of opportunities, including a chance to rework the system of agriculture subsidies, to revise the relationship with the Republic of Ireland with regard to Northern Ireland.

"And I think that being out of what is a rather unsuccessful European Union, particularly in economic sense gives us opportunities as well as, obviously, great political difficulties," King said.

UK Queen Disappointed by Prime Minister's Refusal to Discuss Brexit Strategy
In June, the United Kingdom voted in a referendum to leave the European Union. Soon after the referendum, UK Prime Minister Theresa May said that the country would trigger the Article 50 of the EU Lisbon Treaty by the end of March 2017, thus beginning withdrawal negotiations.

A number of EU leaders have stated that the United Kingdom will lose its access to the EU Single Market unless it keeps freedom of movement rules. May, meanwhile, suggested at the Conservative Party conference in early October that control over immigration would be prioritized over the access to the European Single Market.