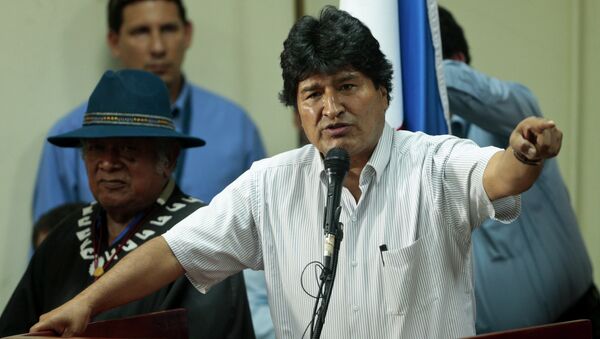 The presidential decree will not affect those sentenced for grave crimes, which include homicide charges, terrorism, kidnapping, aggravated robbery, contraband, corruption, human trafficking, and assault on state officials.

"The present decree's aim is to give amnesty and total or partial pardons to people who have been deprived of their liberty," Morales told reporters at a press conference in the city of Cochabamba. This is the fourth time Morales approves statewide pardons.

The decree is perceived as a measure to fight the overcrowding of prisons: according to some estimations, almost 15,000 of nation's 10.6 million people are in prison, with less than one third of them have already faced trial. This figure represents 0.14% of nation's population; by comparison, in the US, 0.68% of the population were in prison as of 2013, making it the world's second largest per capita imprisonment ratio.

The state's largest prison, San Pedro, is notorious for its inner society formed by prisoners who have no guards inside, impose their own laws, live with their families and welcome tourists, who bring them the money. The government promised to close San Pedro to stop "cocaine trafficking and other abuses" in 2013, but as of 2016, the prison is still there.

Russia, Bolivia Sign Deal on Military Cooperation at Army-2016 Expo
Another prison, Palmasola Penitentiary in the city of Santa Cruz, was built for 800 people but holds 4,800 inmates. On August 23, 2013, a violent fight broke out, with inmates cutting each other with knives and machetes and finally burning each other using fire extinguishers filled with gas. The riot ended with a massive fire. Thirty-one people died in the melee, including a one-year-old child, and 37 were injured. Over the next few days, four more people died from their burns, bringing the total number of fatalities to 35.

"The government isn't interested in people who go to prison, neither is most of society," Human Rights Ombudsman Hernán Cabrera said in 2015, when Pope Francis visited Palmasola Penitentiary during his visit to Bolivia. "We see prison as a dump. It's the final dump, and we send people there to rot.  We don't give them a second chance."