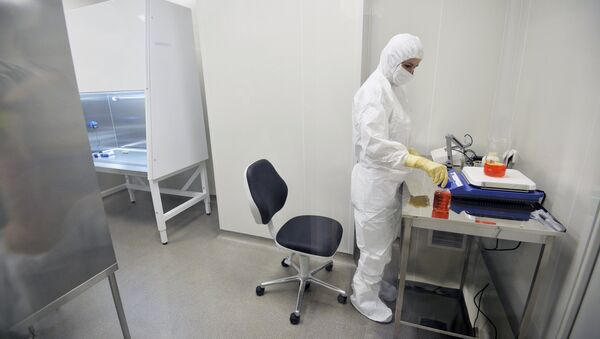 In mid-December, Russian scientists susuccessfully tested a new Ebola vaccine. According to Dr. Marie-Paule Kieny from the World Health Organization, the fact that there are several vaccines in the market is positive.

New Ebola Virus Vaccine Shows 100% Effectiveness in Trials
Earlier this week, it was reported that Canadian researchers came up with a new vaccine against Ebola virus that has been proved to be 100 percent effective in trials.

The vaccine, dubbed rVSV-ZEBOV, has proved to be highly successful in trials conducted in Sierra Leone and Guinea, scientists from the World Health Organization (WHO), the Norwegian Institute of Public Health and other groups said.

"This vaccine was developed over a decade ago by Canadian specialists. However, its development was delayed for several times because the vaccine was not expected to be commercially used. Until 2014, the research was funded by the Canadian government and after 2014 by the United States, because Ebola was considered a virus that could be potentially used by terrorists," Dr. Marie-Paule Kieny, Assistant Director-General at the World Health Organization (WHO), told Sputnik France.

According to Dr. Kieny, the fact that Russia has also developed an Ebola vaccine is a very positive sign.

"We’re very happy that there is also a Russian-developed Ebola vaccine. A monopoly is always bad for healthcare. The fact that there are already two vaccines is a very positive piece of news," she pointed out.

Russia
Russian Ebola Vaccine Successfully Passes Second Phase of Clinical Tests
The Russian vaccine was presented in January. Its production was started at the Federal Center for Epidemiology and Microbiology.

However, in mid-December, it was reported that another Russian-developed Ebola vaccine successfully passed the second phase of clinical tests. According to the Russian federal health and epidemic watchdog, preparation of the documents was started to register the vaccine.

"Recently I read that Vektor from Novosibirsk developed another vaccine. This is very positive," she added.

The vaccine successfully passed the first phase of clinical tests on 60 volunteers in May. The vaccination against Ebola was created by the Vektor scientific center.

Africa
WHO Declares End of Recent Ebola Virus Outbreak in Liberia
The State Scientific Center for Virology and Biotechnology "Vektor" is one of Russia’s leading centers in the field. It was established in 1974. The center conducts scientific and practical activities to withstand global infection threats. It is known for broad international cooperation activities, including with the WHO.

The most recent Ebola outbreak started in December 2013 in Guinea and later spread to Liberia and Sierra Leone. The virus has claimed the lives of over 11,000 people, according to WHO estimates.

In June, the WHO declared the end to the Ebola outbreak in Guinea and Liberia.