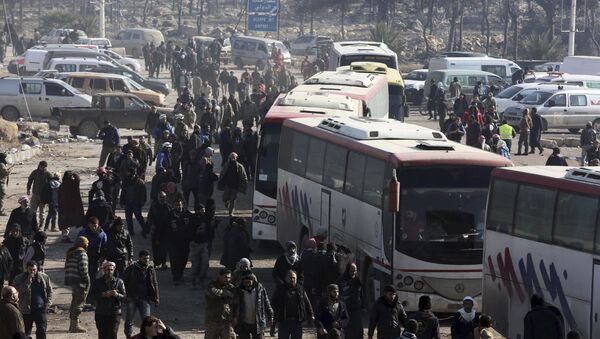 © AP Photo
Subscribe
International
India
Africa
People who have left the Syrian city of Aleppo, as well as other Syrian civilians, have received about 8 tonnes (metric tons) of humanitarian aid, including presents for children, the Russian center for Syrian reconciliation informs.

UN Must Get Access to Syria’s Aleppo, Britain's Boris Johnson Says
MOSCOW (Sputnik) – According to the statement, the aid was delivered to temporary shelters for people who have left Aleppo, as well as to residents of other areas. New Year presents were delivered to children in the city of Tartus.

"In the past 24 hours three humanitarian initiatives have been carried out, as a result of which humanitarian cargo was passed to civilians," the center said in a bulletin published by the Russian Defense Ministry on Friday.

Syrian government forces have been fighting against multiple opposition and terrorist groups, including Daesh and Jabhat Fatah al Sham, formerly known as Jabhat al-Nusra, or Nusra Front. The Syrian civil war has been ongoing since 2011 and has claimed hundreds of thousands of lives, displacing millions of people.