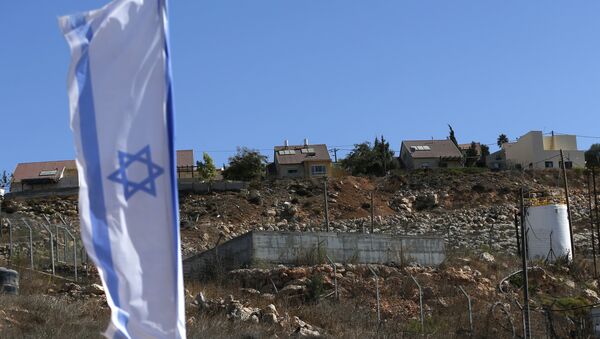 "A week ago, the United States equipped Israel with the world's most advanced aircraft because it understands the threats posed to Israel in the region, but today they abandoned Israel in the political sphere to its hostile enemies," Galant was quoted as saying by the Jerusalem Post newspaper.

On Friday, the UN Security Council passed a resolution in a 14-0 vote, with the only abstention from the United States, condemning Israeli settlements in the West Bank. The resolution states that Israel should immediately and completely cease all settlement activities on "occupied Palestinian territory," including in East Jerusalem.

000000
Popular comments
When Israels time comes and it is being destroyed by all the rnemies it's made I won't shed a tear. Here is a people who constantly bemoan the injustices of the past they have been put through yet they have no problem doing the same or worse to others. Disgusting nation.
Mitach2002
24 December 2016, 15:06 GMT5
000000
Israel is an over grown cry baby who bullies Palestine women and children. It's time to feel the other end of the stick. Your raping and murder days are over. The people of God are Syrians. You have deceived the world.
copius
24 December 2016, 13:29 GMT2
000000
Newsfeed
0
New firstOld first
loader
LIVE
Заголовок открываемого материала
Access to the chat has been blocked for violating the rules . You will be able to participate again through:∞. If you do not agree with the blocking, please use the feedback form
The discussion is closed. You can participate in the discussion within 24 hours after the publication of the article.
To participate in the discussion
log in or register
loader
Chats
Заголовок открываемого материала
Worldwide
InternationalEnglishEnglishMundoEspañolSpanish
Europe
DeutschlandDeutschGermanFranceFrançaisFrenchΕλλάδαΕλληνικάGreekItaliaItalianoItalianČeská republikaČeštinaCzechPolskaPolskiPolishСрбиjаСрпскиSerbianLatvijaLatviešuLatvianLietuvaLietuviųLithuanianMoldovaMoldoveneascăMoldavianБеларусьБеларускiBelarusian
Transcaucasia
ԱրմենիաՀայերենArmenianАҧсныАҧсышәалаAbkhazХуссар ИрыстонИронауОssetianსაქართველოქართულიGeorgianAzərbaycanАzərbaycancaAzerbaijani
Middle East
Sputnik عربيArabicArabicTürkiyeTürkçeTurkishSputnik ایرانPersianPersianSputnik افغانستانDariDari
Central Asia
ҚазақстанҚазақ тіліKazakhКыргызстанКыргызчаKyrgyzOʻzbekistonЎзбекчаUzbekТоҷикистонТоҷикӣTajik
East & Southeast Asia
Việt NamTiếng ViệtVietnamese日本日本語Japanese俄罗斯卫星通讯社中文（简体）Chinese (simplified)俄罗斯卫星通讯社中文（繁体）Chinese (traditional)
South America
BrasilPortuguêsPortuguese
NewsfeedBreaking
03:14 GMTPele Cheers Up Fans by Posting Video of Him Riding Exercycle in Hospital
03:07 GMTAxis of Resistance Killed US, Israeli Commanders in Revenge for Soleimani's Assassination - Report
02:56 GMTPolitical Capital & GOP in His ’Grip’: Trump ’Wants Back’ in 2024, Journos Say
01:43 GMTIRGC Chief: Iran No Longer Sees US as Threat - Report
01:18 GMTChinese Covid Vaccines Reach 100 Nations, But WHO Warns Africa Still Short 470 Million Shots in 2021
01:04 GMTAwkward Moment as White House Staff Cuts Off Biden-Johnson Meeting in Mid-Sentence
00:20 GMTVideo: Military Jet Intercepts Small Aircraft Over NYC in the Middle of UN General Assembly
00:19 GMTPark Ranger ‘Implored’ Gabby Petito to Distance Herself From Toxic Relationship With Brian Laundrie
YesterdayVideos: 6.0 Earthquake Strikes Southeastern Australia
YesterdayPro-Reunification Candidate Chang Ya-chung Edges Ahead as Chairman Election in Taiwan’s KMT Nears
YesterdayTexas Governor Vows to Prevent Del Rio Migrant Surge Disaster From Being Replicated
YesterdayUber’s Business Model Faces Threat After Legal Setback Across Europe
YesterdayUS Lawsuit Challenges Alliance of 2 Airlines for Stifling Competition
YesterdayTaliban Say No Al-Qaeda Members Present in Afghanistan
YesterdayJoe Biden Faces Backlash Over Inept UN Speech
YesterdayUS Democrats Strike Down $1Bln in Israel Defense Aid to Keep US Govt Running, Reports Say
YesterdayPope Jokes ‘Some People Wanted Him Dead’ While He Was Undergoing Surgery, Reports Say
YesterdayNo American Dream for Haitians
YesterdayBoris Johnson Contradicts Joe Biden With Claim of Intelligence That Taliban Could Take Kabul
YesterdayPelosi Accuses GOP of ‘Trying to Force First-Ever US Default’ by Opposing Limit Suspension Bill