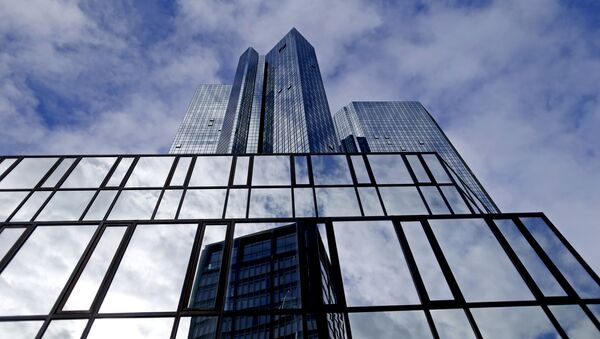 Rigged: Deutsche Bank Under New Probes From US Court, German Authorities
Germany's biggest bank has agreed to pay US$7.2 billion to the DoJ, considerably less than the US$14 billion originally demanded. Credit Suisse has agreed to pay US$5.3 billion. The scandal dates back to the years immediately prior to the financial crisis, in which banks banks packaged together bundles of non-performing loans, mis-rated them as AAA investments and sold them on, knowing they were likely to fail.

The fines represent the last settlements reached with financial institutions under the Obama administration, which has sought compensation from a variety of offending banks since 2009, although they represent the first settlements with non-US banks — Bank of America Merrill Lynch, Citi, Goldman Sachs, JP Morgan and Morgan Stanley have all been fined previously.

However, concerns have been raised of leniency being extended to US banks, particularly in the case of Goldman Sachs. It played perhaps the leading role in the misselling scandal, but received a comparatively minor fine of US$5 billion in April, and hasn't paid a penny to the US Government as of December. O'Byrne told Sputnik the bank was undoubtedly treated favourably by the DoJ.

Goldman sachs manipulates stock to profit billions of dollars, and they just got a 9 million dollar fine. (but stealing over 1k is a felony)

​"Goldman Sachs got away very, very lightly indeed under Obama, totally evading criminal prosecution for its conduct. There seems to be a revolving door between Washington and Wall Street, and there's real regulatory capture. There's little indication Trump will hold Wall Street accountable for its actions either," Mr. O'Byrne told Sputnik.

An action against the Royal Bank of Scotland is ongoing, and papers were filed against Barclays December 22. In a statement on the filing, the DoJ accused Barclays of "plainly irresponsible and dishonest" conduct.

Barclays are right to dispute the Justice department. The fine is ridiculous. Governments should be more sympathetic towards banks.

​"The widespread fraud investment banks like Barclays committed in the packaging and sale of residential mortgage-backed securities injured tens of thousands of investors and significantly contributed to the Financial Crisis of 2008. Millions of homeowners were left with homes they could not afford, leaving entire neighborhoods devastated."

"Today's complaint makes clear that the Department of Justice will continue to hold financial institutions, and the individuals who work for them, fully accountable for harming investors and the American public," said principal deputy associate attorney general Bill Baer.

Barclays publicly responded to the filing by saying it rejected the claims, which were "disconnected from the facts."

"We have an obligation to our shareholders, customers, clients, and employees to defend ourselves against unreasonable allegations and demands. Barclays will vigorously defend the complaint and seek its dismissal at the earliest opportunity."

Barclays' failure to settle is significant, given the US Government's extremely high success rate in corporate prosecutions, but Mr. O'Byrne told Sputnik that it may well be a delaying tactic, employed in the hope the incoming Trump administration "goes lightly" on the bank.

"Only time will tell whether their betting is correct, as it could always work against them. I can't imagine it will in any huge way, though. In any event, the DoJ won't want to be too harsh on the bank, as stress tests indicate Barclays is already under pressure. Most European banks are in the same state."

While Deutsche shares rose in the wake of the settlement, the bank's problems are far from over. The bank is still a defendant in over 7,000 lawsuits worldwide, and there are doubts about its ability to pay the fine unaided by the German government or a cash injection from other investors.

Shares of Deutsche Bank up two %. The $7.2 billion penalty is far lower that the $14 billion the US had initially demanded.

"Unless Deutsche sells off significant parts of its business, or radically changes the way it operates, it will have to source funding from somewhere. Once you add the fine to the bank's balance sheet, it has an €8 billion (US$7.7 billion) shortfall heading into 2019. And while Deutsche execs will no doubt be happy the issue's out of the way, the bank is still in defence of antitrust suits relating to foreign exchange, interest rate swaps, LIBOR, SSA bonds and treasuries cases."