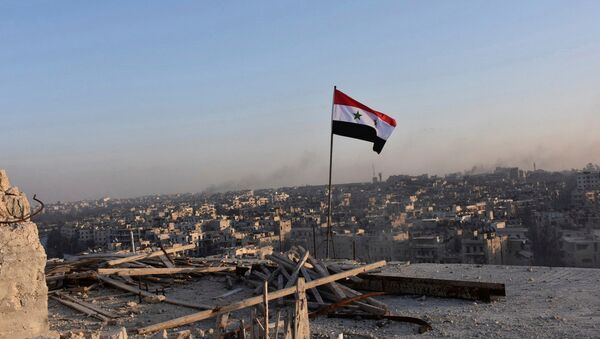 © REUTERS
Subscribe
Russia, Iran and Turkey signaled their willingness to further deal with the Syrian crisis following the liberation of Aleppo. While the "troika" has proved its relevance, the US and EU previously seen as major guarantors in resolving the Syrian conflict are "leaving the arena."

It appears that the road to Syria crisis settlement runs through Russia, Iran and Turkey.

Commenting on the recent trilateral meeting between Russia, Turkey and Iran on the Syrian crisis in Moscow, Isabelle Mandraud of Le Monde called attention to the fact that the US and EU, previously regarded as major guarantors in resolving the Syrian crisis, have "left the stage."

"The dramatic evacuation of residents and fighters from the rebel-held areas of eastern Aleppo, which fell to the government of Bashar al-Assad, sealed Moscow's victory," Mandraud wrote.

Lavrov emphasized that the statement reaffirms the principles of sovereignty, independence and the territorial integrity of Syria as a multi-ethnic, democratic and secular state.

The foreign ministers of the three countries also highlighted the importance of the ceasefire regime expansion in Syria following the Moscow summit.

"I think the most effective is the format that you see now," he underscored, adding that his statement is by no means an attempt to cast a shadow over the efforts of other global players to make progress in Syria crisis settlement. "It is simply a statement of the fact," the Russian Foreign Minister remarked.

"To date, the format of the Russia-Iran-Turkey 'troika' proves its relevance at least by practical deeds," Lavrov emphasized.

This is the Whole Story of Aleppo's Liberation by Syrian Army
On December 16 the Russian Defense Ministry's Center for Reconciliation reported that the Syrian Arab Army's (SAA) operation to liberate eastern Aleppo from extremists was over.

At a Friday meeting with Russian President Vladimir Putin, Defense Minister Sergei Shoigu highlighted that the operation was conducted in close cooperation with Iran and Turkey.

"The operation was conducted at your request in close contact with Turkish and Iranian colleagues. The next phase should follow. In my view we have come close to achieving full ceasefire on the Syrian territory," Shoigu stressed.

According to the Kremlin, the liberation of Aleppo has paved the way for resolving the Syrian crisis.

"The liberation of Aleppo from the radical element is the most important component of a full normalization in Syria, and I hope in the region as a whole," Putin underscored.

Russia, Turkey, Iran Trying to Resolve Syrian Crisis But There is a Key Obstacle
However, Mandraud argues that there exist disagreements between the allies on the situation in Syria. On Wednesday, Secretary of Iran's Supreme National Security Council (SNSC) Ali Shamkhani expressed his skepticism about the latest UNSC Resolution, supported by Russia.

The Resolution urges the immediate deployment of UN monitors in Aleppo; Shamkhani suggested that it may fuel further tensions in the city.

For his part, Vzglyad columnist Petr Akopov praises the Russo-Turkish-Iranian alliance, assuming, however, that the "troika" may face several challenges. Akopov called attention to the fact that Ankara and Tehran support opposing sides of the Syrian conflict.

"Regardless of two extraordinary events which shook Russian-Turkish relations in the last 13 months (the Su-24 downing and the ambassador's assassination), another side of this triangle is its weakest link," he suggested in a reference to Tehran.

However, despite these possible bumps in the road the Russo-Turkish-Iranian cooperation has proven to be effective.

"With our partners from Iran and Turkey and of course the Syrian leadership and other countries in the region, with all interested states, we will have to continue to work on the final reconciliation," the Russian President emphasized Friday.