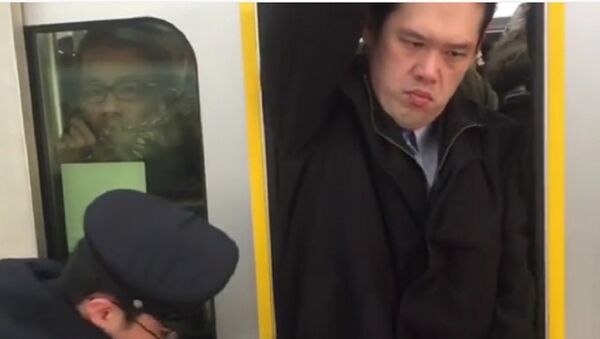 This Japanese salary man remains as cool as a cucumber when station attendants shove passengers into a train during rush hour in Tokyo to pack them like sardines.

Marco Patella, an Italian photographer based in Tokyo Japan, captured two incredible videos from Shakuji Koen Station, located in the Tokyo suburb of Nerima which is a major rail hub for people who work and study in the city center. The footages show train personnel shoving commuters with all their might to shut the train doors during peak hour.

The first video on Patella’s Instagram shows a typical Japanese salary man in black coat and white shirt holding a case, who keeps an impressive stone face while checking his smartphone and looks like he could not care less about three station attendants trying to push him deeper into the train. A woman next to him desperate to get in seems to be on the brink of hysteria.

The second video shows pretty much the same scene, but without such charismatic characters. It was posted on Facebook and has got over 1,300 shares by the time writing.