Over 180 Injured Syrians, Including 71 Children, Evacuated From Aleppo to Turkey 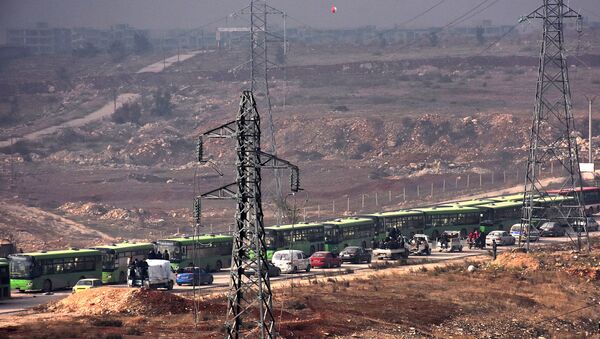 © AFP 2021 / George OURFALIAN
Subscribe
Turkish authorities said that 182 critically injured Syrians from Aleppo, including 71 children, have been successfully evacuated from the besieged city and transported to Turkey.

Militant Pullout From Syria’s Aleppo May Wrap Up Within Hours – Red Crescent
MOSCOW (Sputnik) — According to the Anadolu news agency, of the 182 civilians initially transferred to the country's Southern province of Hatay, 80 were later transferred to other cities within Turkey, 23 were discharged, and five died.

Earlier on Thursday, Turkey's Prime Minister Binali Yildirim said that 40,000 Syrians have been evacuated from Aleppo during the ceasefire deal, the news agency added.

On December 16, the Russian Defense Ministry announced that Aleppo was under full government control with the Syrian army's operation to liberate the eastern part of the city completed. Civilians and militants were leaving the city amid a ceasefire agreement between remaining hotbeds of resistance and government forces.