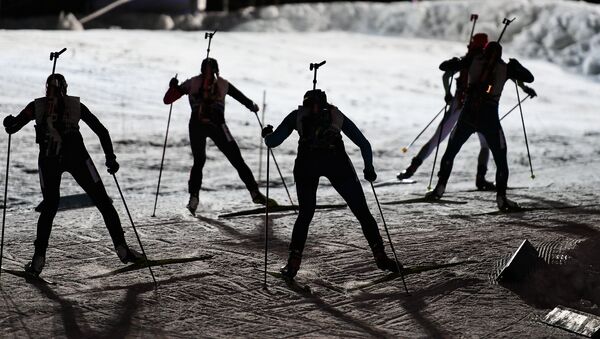 © Sputnik / Alexander Vilf
/
Go to the mediabank
Subscribe
International
India
Africa
The International Biathlon Union (IBU) on Thursday opened a formal probe against the Russian Biathlon Union (RBU) and 29 individual athletes over their alleged involvement in doping scandal, the IBU said in a statement.

Russia
Russian Anti-Doping Commission Head on McLaren Report: Biased Attitude is Unfair
MOSCOW (Sputnik) — The statement added that the RBU informed the IBU that the Youth and Junior World Championships 2017 and BMW IBU World Cup 8 that Russia was expected to host "are given back to the IBU."

"After a thorough evaluation of the available data as of today, the Executive Board decided on the following… Opening formal investigations by the IBU against RBU and 29 athletes listed in the McLaren Report 2 (comparable to cases where there is a positive lab report) for cases not related to the Olympic Winter Games Sochi 2014," the statement said.

The second part of Richard McLaren's report on Russia's alleged doping abuse was presented on December 9 in London. It contains 144 pages, including tables with data on doping samples without specifying the names of the athletes.