Obama's Legacy in Policing: There 'Hasn't Been a Great Deal of Reform' 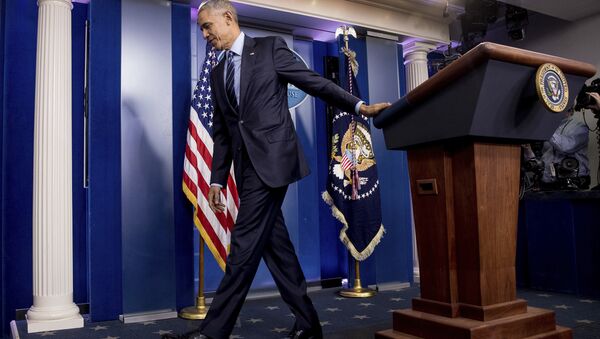 © AP Photo / Andrew Harnik
Subscribe
International
India
Africa
US President Barack Obama called for comprehensive police reform in the wake of officer-involved shootings of unarmed African Americans which first shook the nation in 2014. Justin Hansford, assistant professor at the University of St. Louis School of Law, told Radio Sputnik that the effects of Obama's strategy have been limited.

Michael Slager, a police officer from North Charleston, fatally shot Walter Scott, an unarmed African American, in the back on April 4, 2015. Earlier this month, the judge declared a mistrial after the jury became deadlocked. The date of the next trial has not been announced yet.

"We do see efforts coming from President Obama, but he has gone to great lengths to say that he does not have ultimate powers to implement reforms that could create accountability," he said. "And again, the proof seems to be in the pudding with the Walter Scott case. So I'd say that there hasn't been a great deal of reform that has been successful."

Hansford further commented on a wish list of recommendations for President Trump's first 100 days in office which was released by the largest police union in the US. They include among other things a call to overturn President Obama's executive order limiting the so-called 1033 program under which local police departments received military equipment, including grenade launchers and Humvees.

"The odds are that they will step it up," he said, referring to further militarization of civilian law enforcement agencies. "I know they have said that they want to do things like build the wall [on the border with Mexico] and round up more immigrants. You'd assume that they need as much equipment as possible to follow through on those campaign promises."

Hansford noted that the Trump administration is likely to focus on economic issues and cutting budget spending. In this case, the White House will "see how economically foolish it is to spend money on grenade launchers for local police departments," he noted. If President-elect Trump "does plan to cut back on spending then perhaps there will be a reason for him to hold off on buying more grenade launchers."