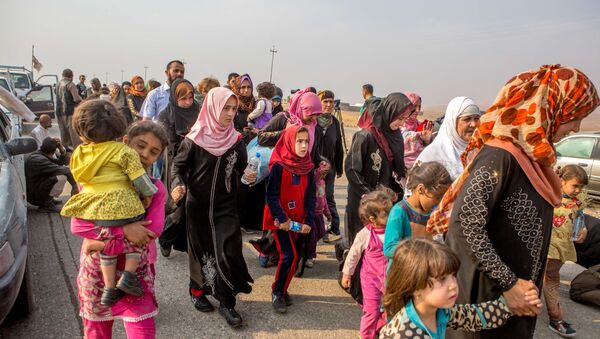 © Sputnik / Hikmet Durgun
Subscribe
International
India
Africa
Iraqi children who suffer horrific traumas or are wounded in the besieged city of Mosul have not received proper medical care due to lack of available services and resources within the city, a human rights group said Thursday.

"War-wounded children then find themselves in hospitals overflowing with patients, or in camps for displaced people, where dire humanitarian conditions make their physical and psychological recovery even more difficult." Senior Adviser for Amnesty International Donatella Rovera was quoted as saying in the group's release.

There are also very few working or accessible hospitals left, the group added, the nearest functional facilities located in the city Erbil 80 kilometers (50 miles) outside Mosul, which was an impossible journey for most civilians.

Aside from lack of medical care, children are left without adequate psychological help to deal with the traumas they suffer in the embattled areas of the city, Amnesty International found.

"The scars left by these unimaginably traumatic experiences are psychological as well as physical, but these life-altering wounds are being neglected by the Iraqi government and its allies, who have so far failed to ensure adequate medical facilities are in place," Rovera said.

The group called upon Iraqi authorities and the international community to prioritize the rehabilitation and protection of vulnerable children in Mosul.

A government-led operation to retake Mosul from militants of the group outlawed in Russia has been underway since mid-October with air support from an international coalition. The stronghold is regarded as the capital of the Daesh-proclaimed "caliphate."